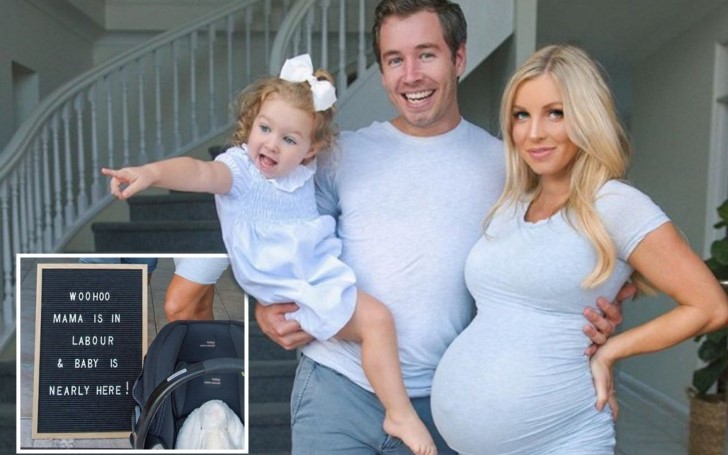 A bikini model was slammed earlier on social media platforms for staging a photo while rocking a full face of makeup to announce that she had gone into labor.

28-year-old Australian beauty Hannah Polites took to her Instagram account and posted a candid snap that shaw the model and her husband Grant Small, alongside daughter Evaliah, heading out to the hospital.

Her followers had some pointers about the post as they stated that the mum not only had her hair perfectly positioned for the picture but had a full face of makeup on with the full-fledged allegation that the photo was completely staged.

Be right back with our precious bundle soon, baby is coming. We’ve officially left the house for the last time as parents of one and will soon be a family of 5... Wish us luck 😍🙌🏻👩🏼👱🏼‍♂️👧🏼🐶👶🏼💙💕 #babyfever #readytopop #newaddition #babycoming

Giving utter justice to the grey outfit which totally matched with her husband's, Hannah let her followers in on the snap just hours prior to welcoming her baby son to the world.

As the family stood right next to a newborn's car seat that was occupied by a teddy bear, a word board showcased the words:

"Mama is in labour and baby is nearly here."

And while many came through with their support to the family photo, others held some varied opinion towards the model's step to stage the post as a 'bizarre' and 'outlandish' thing to do in the throws of labor.

One of her followers commented on the snap,

"Is taking the time to set up a staged photo for Instagram when you're in labour problematic?"

To which a woman snarled in the comments:

"She's like, 'Ready to push', posting photos with a full face of makeup and in a designer hospital gown."

There were suggestions that a modest selfie would have been quite an appropriate choice. While a fourth simple commented, "Is there a need for a full face of makeup for this announcement?"

Others expressed their support towards the Australian beauty's choice articulating that they wished they could pull off the pregnant state while looking 'that good' and went on about her picture-perfect appearance before her birth.

Your first breath took ours away, caught straight into daddy’s arms... Welcome to the family sweet baby, 9 months we’ve been waiting to hold you, touch your soft skin, look you in the eyes and see your sweet angel face. We are in absolute heaven with our little boy 👶🏼💙✨ #itsaboy

One woman took to the comment section and wrote: "It's not my style and I couldn't pull it off, but she's about to have a baby so she can do whatever she likes."

You may also like: Did Daisy Ridley's Boyfriend Drop Engagement Hint?

Another one of her followers supported her by writing that every labor is different and applauded the beauty's effort to capture the memory.