home Entertainment Vitaly Uncensored - When Are We Likely To See Vitaly Zdorovetskiy's Next Streaking Incident? 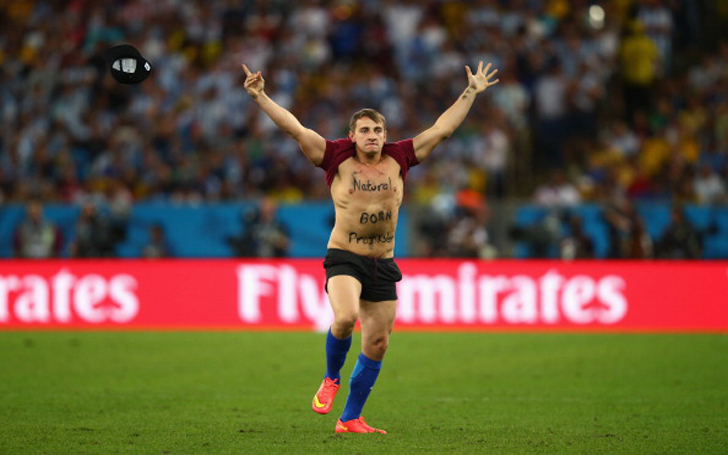 Vitaly Zdorovetskiy is a prankster who plies his trade on YouTube, he was just a prankster, but he shot to fame when he ran on to the pitch of the 2014 world cup final between Argentina and Germany. Vitaly ran on to the field wearing a t-shirt and shorts with football sock and futsal shoes; he lifted his shirt as he ran the words written with black ink were ‘Natural Born Prankster.’ Vitaly ran on the pitch and even blew kisses at the players on the pitch were dumbstruck. He was caught and then carried off-field as this incident shot him to international fame.

It was not a one-off incident as he was again arrested after he ran onto the court of the NBA finals between the Cleveland Cavaliers and Golden State Warriors. He ran onto the court with lettering on his chest reading ‘Trump Sucks.’ The cops at the NBA finals were not as gentle with the prankster as they tackled him down to the court, cuffed him and took him out of the arena. This was the last time he went streaking though as Vitaly was banned from most of the stadiums worldwide.

But the sporting world realized in 2019 a ban is not going to stop Vitaly as he assisted his girlfriend, Kinsey Wolanski, during the Champions League final as she ran onto the pitch during the match between Liverpool and Tottenham. A girl wearing a one-piece swimsuit was assured to make the headlines, and that incident made its way to all the major newspapers and their headlines.

After the success in Madrid, they made their way to Copa America as both Kinsey and Vitaly wore disguises to invade the pitch during the final, but the Brazilian were once bitten, but never again as 20 security guards tackled Vitaly and threw both of them in jail. That was a resounding loss for the prankster.

Vitaly, who is not close with his father ever since he moved away from Ukraine with his mother, Elena Vulitsky, is a supporter of his mother though. And this time the mother got in on the action as she wore the same dress promoting the porn-prank site and tried to run onto the field during the ICC World Cup finals between England and New-Zealand. She was tackled before she could get over the advertisement board, but it got us thinking, where is the talented prankster is setting his eyes now?

Recently Vitaly posted a vlog on YouTube where he held tryouts for the next streaking model, and we are curious as to which event he is planning on hitting next. Tour de France is a huge sporting event but where do you event invade in that event, so let’s cross that out. Ashes start on August, but the games are so boring you won’t know when the peak number of audiences are watching. Then there is the Rugby World Cup, but it is not advisable to invade a pitch full of angry toothless men who are already pissed off.

Watch: Vitaly holding tryouts for the next streaker

The most recent we can see the prankster try to invade a pitch again is on 14 August when Liverpool and Chelsea meet in Istanbul for the UEFA Super Cup. The game is of huge billing, and there will be eyeballs on the match, so that is where Vitaly is most probably eyeing his next streaking video.