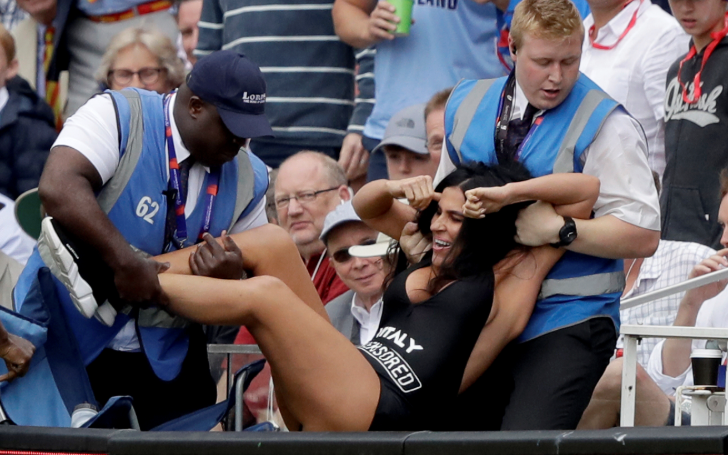 Vitaly Uncensored invades pitch again! Well, this time it was none other than the mother of daring Vitaly Zdorovetskiy.

Yes, you heard it right, the Vitaly Uncensored team seemed unstoppable with their daring stunts as the pitch was invaded again during England's World Cup final with New Zealand at Lord's London today, July 14.

Wearing a skimpy black leotard this time was not Kinsey Wolanski - the famous Champions League final pitch invader but Elena Vulitsky, the mother of the prankster and Vitaly Uncensored star Vitaly Zdorovetskiy.

The 47-years-old Elena streaked down the pitch popping off from the audience seat wearing a sexy swimsuit written 'Vitaly Uncensored' similar to Kinsey's which she embodied while pervading Liverpool and Tottenham finale.

Soon as the stunt was pulled Vitaly took it to Instagram and shared among his millions of fans writing 'My mom streaking The Cricket World Cup 😂😂 what a legend!! @zdlena #cwc19#cricketworldcup'

Well, FYI recently during the Copa America finale both the partner in crime Kinsey and Vitaly planned to pull the same publicity stunt but was arrested by around 20 security guards.

But the mother successfully pulled out a daring stunt and proved that she is the mother of the daring prankster Vitaly. So guys, what do you think about the daring feat? The lady got guts, doesn't she?

Well, the stunt helps them to gain millions of likes and subscribers, but the whole family now is definitely under surveillance for any significant events. We wonder what Vitaly's father is into.

Stay tuned and connected to find updates on the news and more intriguing articles only on Glamourfame.