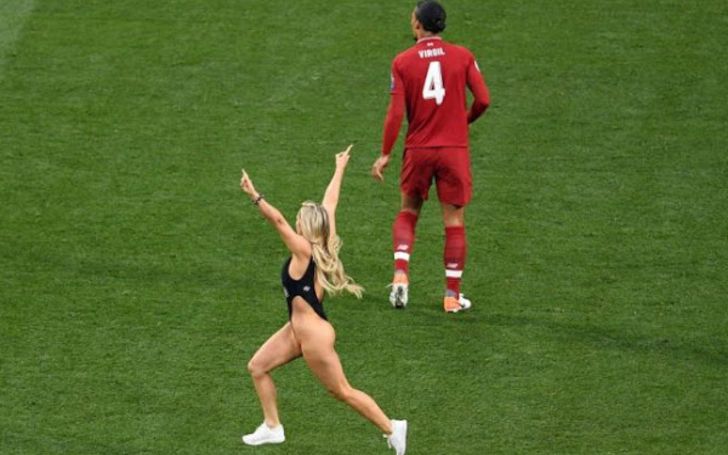 You might have been surprised seeing a hot blonde running on the pitch wearing a skimpy black leotard during the recent Champions League Final on June 1.

If yes then the question might definitely be popping inside your mind about who she actually was. So in the article, we have come up with all the details regarding who she really was.

Well, the hot bombshell Kinsey Wolanski is an American model/actress and notably the girlfriend of a famous prankster Vitaly Zdorovetskiy.

Kinsey is all over social media and news precisely after the recent shocking event during the 17 minutes runtime of the match on June 1. The 22-years-old Instagram star jumped right out of the audience running, interrupting the finale game wearing a sexy swimsuit.

As reports by the investigators, the Slasher Party star was locked up for her act and wasn't allowed to watch the match furthermore, however, Kinsey shared that she was there to watch the Tottenham's midfielder, Harry Winks.

But we assume that all this drama was a publicity stunt for his boyfriend's x-rated prank site, 'Vitaly Uncensored'.

In fact, her Instagram blossomed from around 300k plus to a whopping 2.1 million overnight.

Well, Zdorovetskiy is a famous Russian prankster who often posts funny and hardcore prank videos, travel vlogs and other fun contents on Youtube.

Zdorovetskiy initially started his Youtube career uploading skateboard stunt videos but gave up after series of injuries then went to the adult film industry as 'Diamond Kitty' for entertainment company 'Bang Bros.'

So after deciding to quit the obscene industry, he decided to open a prank channel but with some flavors from the adult industry.

Well, their pranks are definitely unique and unlike any other which we can definitely predict from the Champions League. You can check out their hilarious pranks on youtube and their official site Vitaly Uncensored.

Who Was Georgina Rodriguez's Boyfriend Before She Dated Cristiano Ronaldo? Find Out Details Of Her Past Affairs And Dating History! >>>

Stay tuned and updated with us to find out recent news and intriguing articles.