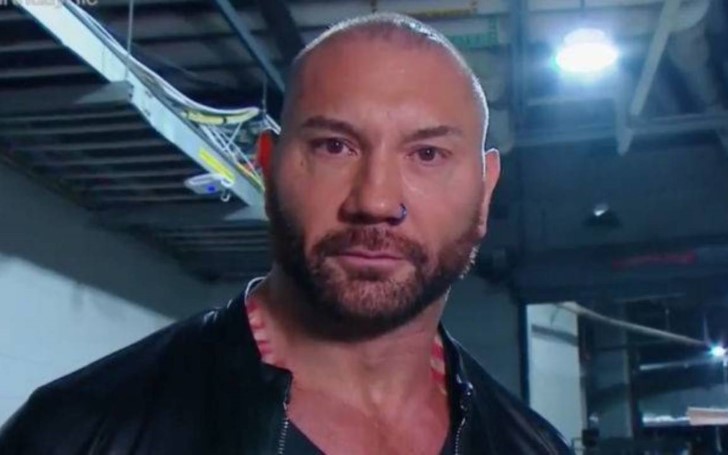 The ring was filled with balloons, cake, and a special World Heavyweight Championship belt designed for the 70th birthday celebration of WWE Hall of Famer, Ric Flair. In addition, the belt was also planned to be awarded to the Nature Boy in the grand presence of Triple H, Stephanie McMahon Ricky, Shawn Michaels, and Sting.

The applause was ever soaring in the wait for the birthday boy. But, the sound started to go numb after everybody realized Flair was taking a noticeably long time to make his cue. And then the feed cut to backstage where Batista was shown dragging a cameraman up to Flair’s dressing room. The Animal is then seen pulling an unconscious Flair out of the room and finally leaving the grip off of Ricky Rhodes at the hallway. He then faces the camera and leaves the message

"Hey Hunter, do I have your attention now? Huh?!"

Triple H promptly runs to the backstage only to find Flair still knocked out. But the Animal was nowhere to be found.

Also Read: WWE Studios Set To Partner Up With Netflix

Before the Triple H’s heavyweight championship prohibition, Batista had been teaming up with Triple H and Randy Orton (as a reunited Evolution) to take revenge on Shield for obstructing their plan--of not letting Bryan defend his WWE title against Triple-H. But Shield defeated Evolution not once but twice from the two respective matches (the Extreme Rules and the Paybacks). The bright side though, Bautista left as his Hollywood film career began to take off with roles in major blockbusters like Guardians of the Galaxy and Blade Runner 2049.

Despite being busy with all those successful acting gigs, Bautista was repeatedly saying in the interviews he wanted to come to the WWE but only at non-televised version, yet he was consistently being denied or ignored. Back in April 2018, Dave was again ignored by the writing member or better yet betrayed when he was suddenly dropped off the plan--to be Ronda Rousey's tag partner for the wrestle mania 34 (mixed tag match) at the last moment. The honor was instead given to Kurt Angle. And the fact that this was done without even consenting the Animal fueled his hostility with Triple H, Stephanie McMahon even further.

So his return on WWE at the 1000th episode of Smackdown on October 16, 2018, was rather a way out to get him a matchup against Triple-H so that he could get even with his former ally and the whole WWE writing members. During the Smackdown's millennium segment, Batista mentioned that Triple H had never beaten him one-on-one, causing a tense face-off between the two.