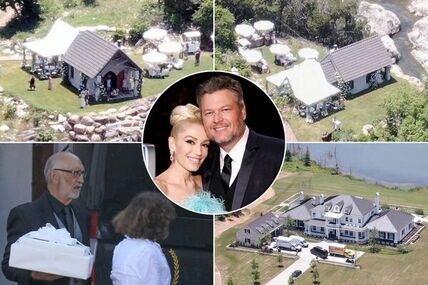 Fans and the couple themselves have been long waiting for this day. After more than six years together, musician Gwen Stefani, 51, and singer Blake Shelton, 45, have officially tied the knots. Verifying the bombshell news, Page Six wrote, "There is no doubt this time that Gwen Stefani and Blake Shelton have tied the knot."

The wedding was a very private affair; it took place on Saturday at Shelton’s Oklahoma ranch, where Blake reportedly built a chapel a while ago to marry Gwen. Stefani had announced her engagement in October 2020. In April, Shelton said, "Hopefully, it's happening this summer. With COVID, it looks like it may be OK, but I don’t know."

The couple had announced their engagement back in October 2020.
Photo Source: Ok Magazine

Stefani, too, had revealed the obstructions standing amid their plans two months ago. "I would love to get married, but I want my parents there. So that’s hard to plan. We have three kids in school, so hopefully, that will end for them. But there’s not a lot of plans," Stefani told Wonderland Magazine.

This was Shelton's third time walking down the aisle. He was previously married to his high school sweetheart, Kaynette Williams. Blake married Miranda Lambert in 2011. The duo split ways in 2015. He doesn't have any children from both of his previous marriages.

Shelton reportedly built a chapel at his ranch to marry Stefani. Photo Source: The Sun

Gwen, on the other hand, Gwen is a mother to three sons, Kingston, Zuma, and Apollo. She had the children with her ex-husband, musician Gavin Rossdale. Gwen and Rossdale got married in 2002. They called it quit in 2015.

While multiple sources have verified Shelton and Gwen's marriage, the duo is yet to make any public comments on it, nor have they received any official congratulatory from friends and family on social media. A source revealed that the couple had applied for a marriage license in Oklahoma weeks ago.