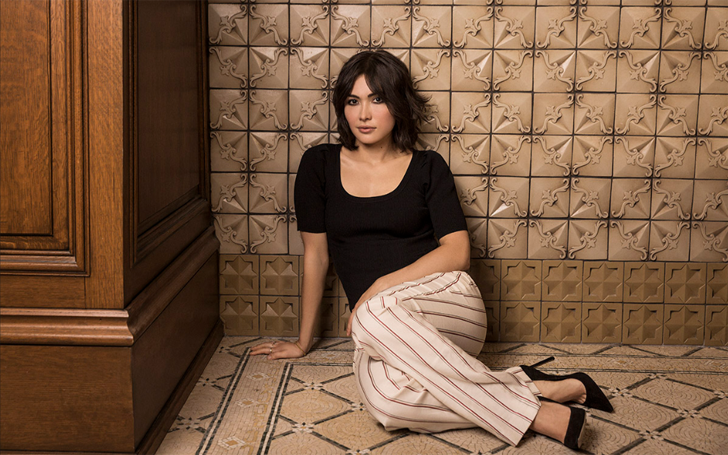 Born on 20 February 1987 the Mexican-American ethnic actress was one of three children of her parents Eric Klein and Patricia Pineda. Her siblings, a brother Elliot Klein and sister Anneliese Michaela were the ones she grew up with for a while, and now the actress is on her way to a starring role in a huge Netflix show.

One thing about Daniella Pineda is she is funny, and her Instagram can bear witness to the fact with her showing off a kid or her bio which reads, “If Jlo and Jim Carrey had a baby on “In Living Color.” The actress is on the rise, and she is not slowing down by any measure with 2020 thought be the best year of her career. So, here are five facts you should know about the 'Jurassic World' actress Daniella Pineda.

5. Daniella Said Her One Scene Of Coming Out As Gay Was Cut From Jurassic World

Daniella got her biggest break to date on the sequel to the then third highest-grossing movie in Hollywood, 'Jurassic World: Fallen Kingdom'. She played the role of 'Zia Rodriguez' in the film where she was also a Marine and later-on a paleo veterinarian with the Dinosaur Protection Group. She travels to 'Jurassic Park' with all the lead characters and when in a vehicle traveling inside the park, she reveals her sexuality in the scene, but it was later cut from the movie.

Daniella Pineda’s character in the movie was revealed to be lesbian in the scene, but the whole thing was cut. The actress, it seems, understood why the scene was cut but it was still a huge scene she wished was in the movie. She said, “I understood why they cut it — for sake of time. It's me and Chris Pratt, and we are in a military vehicle with all of these mercenaries. I look at Chris and am like, 'Yeah. Square jaw. Good bone structure. Tall. Muscles. I don't date men, but if I did, it would be you. It would gross me out, but I would do it.” The actress continued, “It was cool because it was a little insight into my character.”

4. Her Acting Career Took Off After A Hollywood Manager Saw Her Satirical YouTube Videos

The actress was just working in a radio station NPR, and she loved her work in the place during a time when the work and the good-paying job was hard to come by. The actress worked hard at her job and while her job was still going Pineda started making YouTube videos, and it was the YouTube videos which attracted the interest of manager Kristen Ames and with the notice of a Hollywood manager Pineda was able to get bit parts in 'Homeland', 'Inside Amy Schumer' and the biggest role of her career till then, 'The Originals' and 'American Odyssey'.

3. She Was Forced To Leave Her Family Growing Up

The Jurassic World actress was forced to leave her family when she was only 16 years old. Right after she was done with the tenth grade, the future actress was not able to live with her parents anymore. Her family was hit with huge economic difficulty, and then Daniella was adopted by her uncle and aunt who were an engineer and Toyota exec. When pressed about her parents, the actress says they are not really in the picture anymore, and she also says she hit the jackpot when it comes to her guardians later on in her life.

2. Daniella Pineda’s Tattoo And The Meaning Behind It

The 5 feet 5 inches tall comedian is petite, but she is also sporting a huge tattoo on her right shoulder, which looks perfect for her. The tattoo is of Native American tribal masks and if you look the tattoo closely makes its appearance in many other movies and TV shows. To this day only one tattoo is visible on her body, and it is really nice though the size could’ve been a little smaller to complement her shoulder perfectly.

1. Probably The Biggest Role Of Her Career In Cowboy Bebop

After her appearance in the 'Jurassic World: Fallen Kingdom' the actress got a lot of attention and was hired into many shows and movies. But the best of her career only started filming in New Zealand a few days ago. The actress is currently in the Southern Hemisphere filming 'Cowboy Bebop', and she is playing the role of 'Faye Valentine' which is a starring character. The animated show is beloved in the fan community, and the live-action remake from Netflix is currently one of the most awaited shows on the streaming site.

The actress is on to better things, and she is going to be a dominant force in the coming years. Whether she will appear in the third part of Jurassic World is still unclear, but we are more than excited to see where the actress goes from here.

Make sure you head on over to Movies & TV Shows to catch up on all the new shows and movies and also don’t forget to check Glamour Fame and find the thing you like, we’ve got something for everyone.