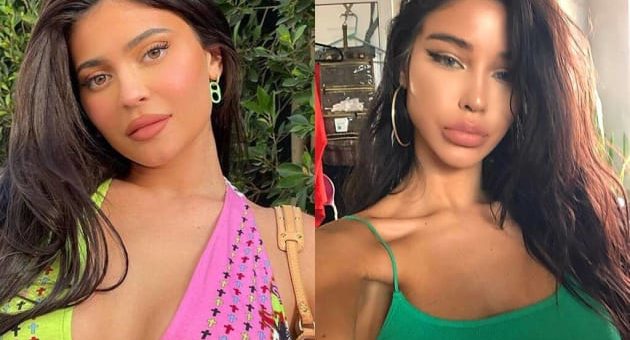 Kylie Jenner Has Caught Herself In Yet Another Controversy: The Reality TV Star Denies Allegations!

Kylie Jenner, 23, is being accused of bullying a model in the latest headlines. Victoria Vanna, 26, took to Tik-Tok this week making claims against the Keeping Up With The Kardashian star. The event dates back to Tyga's music video Ice Cream Man.

In the short clip, Victoria is seen saying, "The time I did Tyga's music video & Kylie Jenner was on set bullying me with her friends." The model further adds, "As soon as I walked out, she was looking me up and down, whispering and pointing and making fun of, like, how I was dancing. They were all just making fun of me, clearly."

"I was excited to meet her, and I just felt bullied for no reason," states Vanna.
Photo Source: The Sun

Further describing the event, Vanna tells she felt so humiliated that she started to tear up and left the set, she recollects. Kylie and her friends went into the parking lot, still demeaning her apparently, Victoria states, "It was a white Rolls-Royce. They were all in there, eating McDonald's, and then I was like walking by, and I could hear them, they're literally still talking about me. I felt my face get hot because I was excited to meet her, and I just felt bullied for no reason."

Kylie has responded with a sentence, taking on the shade room post on Instagram; she wrote, "This never happened." Jenner has been accused of more plausible offenses than this in the past. Soley based on one person's words and an occurrence from years ago, fans aren't sure about this. Many think Victoria is just trying to get some clout.

One writes on the model's post, "She trynna get her 5 min of fame." "you look like you're desperately trying so hard to look like Kylie, writes another. On the other hand, many have come forward in support of Victoria and have taken on Kylie's pictures. One user wrote, “Kylie, LOL we know it happened, babe, it’s okay. We know it was a long time ago."