home Entertainment Is Lou Diamond Phillips Married? Who is His Wife? Grab Details of His Children as well as Dating History!

Is Lou Diamond Phillips Married? Who is His Wife? Grab Details of His Children as well as Dating History! 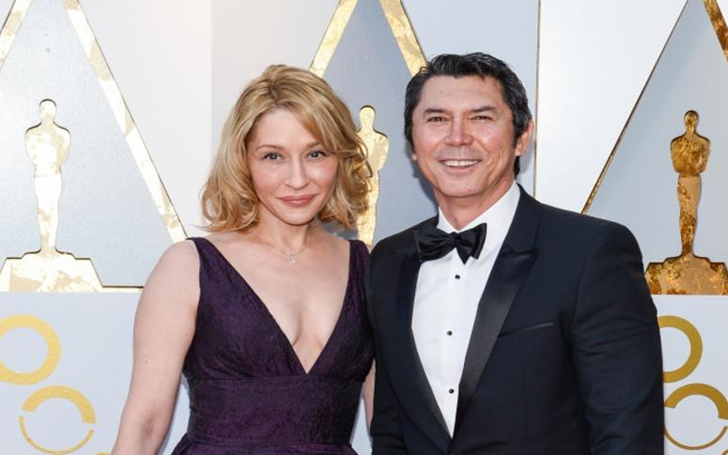 Subic Bay Naval Station was the place where Lou Diamond Phillips was born to Philippines mother Lucita Umayam Aranas and Marine KC-130 crew chief Gerald Amon Upchurch who is of American Scottish-Irish descent. He is a mixed baby and was named after the Marine Leland “Lou” Diamond by his father. After the death of his father the 17 February, 1962 born actor took the name of his step-father to form the complete name we know him by, Lou Diamond Phillips.

Little Lou stayed in Texas with his parents where his formal education was completed, and soon he joined the University of Texas where he studied and graduated with a degree in fine arts in drama. He wanted to be an actor which is why he started auditioning for roles and got his first break in the movie 'La Bamba' which was a biopic, and he made a name for himself, and this resulted in the actor getting cast in 'Young Guns' which was the first major box office success for the actor.

While his career was going on in a positive direction, the actor was going through some unstable relationships. It takes time and effort to manage a relationship which was lacking earlier in his life from both sides, which resulted in most of his relationships failing. But there was one which lasted and is still going strong.

Is Lou Diamond Phillips Married? Who is His Wife?

After a couple of failed relationships and going through a divorce the actor met makeup artist Yvonne Boismier. While Lou was separated from his wife, in 2004, the actor met Yvonne and love blossomed between the two, which resulted in the two going out on dates, and she even moved in with him.

After two years of dating, the actor popped the question in 2006, which was also the year when he was arrested by the police for domestic violence. Lou was arrested on 11 August 2006 when his live-in girlfriend, Yvonne, called the cops on him and he was taken to jail, and when he was brought to the court, the actor did not contest the charges which resulted in him receiving three years of probation and one year of domestic violence counseling.

Even after the arrest and the call to the police, the couple stayed together and got married on 16 August 2007. The marriage was two months before the birth of their daughter, Indigo Sanara Phillips, who was born in October of 2007. The couple seems to be happy with over 12 years of marriage, and there was no report of any more violent behavior with one arrest stemming from the actor driving while drunk. It seems they are going strong with each day of marriage and looks like Lou found the one for him after years of searching.

Lou Diamond and His Past Relationships and Wives

The first person who Lou married was Julie Cypher, who was as assistant director on one of the movies of Lou. The two got married on 27 June 1987, and the relationship did not result in any children. After only about three years of marriage, the couple divorced on 5 August 1990. The amazing thing about the divorce was after the ink was dry on the divorce papers, Julie, announced she was lesbian and got into a relationship with Melissa Etheridge. No one would blame people if the fact of her being lesbian was the reason the couple separated and ended their marriage in the first marriage.

Lou was also rumored to be in a relationship with Ginger Lynn who claimed she was intimate with Billy Idol, Lou and George Clooney over the years. Then the actor got in a serious relationship with actress Jennifer Tilly with whom he appeared in the movie 'Shadow of the Wolf' in 1992 and was also engaged to her for a while, but the relationship did not go the distance with the two ending the engagement and going their separate ways.

Then in 1993, the actor met Penthouse model, Kelly Phillips, in 1993 and after a brief romance, the two got married on 24 April 1994. The couple was happy for a while, and she also gave birth to their first kids, twins Grace and Isabella on 5 October 1997 and the third child, Lili Jordan, was born on 26 September 1999.

But after hitting some choppy waters on their relationship, the couple separated about ten years into their marriage. Though the couple was separated in 2004, the separated husband and wife only got divorced on 30 July 2007. She took the kids, and after the divorce was finalized moved, Lou got married again to his current wife.

Lou Diamond is playing the character of ‘Gil Arroyo’ in the new Fox thriller/drama series ‘Prodigal Son’ starring ‘The Walking Dead’ actor Tom Payne. Lou’s character of, Gil, is almost like a father figure to the character of Tom, Malcolm, in the series. Gil was the person who arrested Malcolm’s father, who is a serial killer after Malcolm warned him of his father’s killing tendencies. Since the day he is the one person along with his mother looking into the life of Malcolm and helping him become a better man.

After the FBI fires Malcolm, Gil comes to him asking for his help and his profiling prowess to catch killers in the city. This is going to the central plot of the story with the manipulation of Malcolm’s father playing the overarching plot device.

Watch: The first trailer for the thriller/drama series 'Prodigal Son' currently on Fox

You can watch 'Prodigal Son' on Fox, every Monday; only one episode debuted till now so better catch up, it is an amazing show, and you don’t want to miss it.