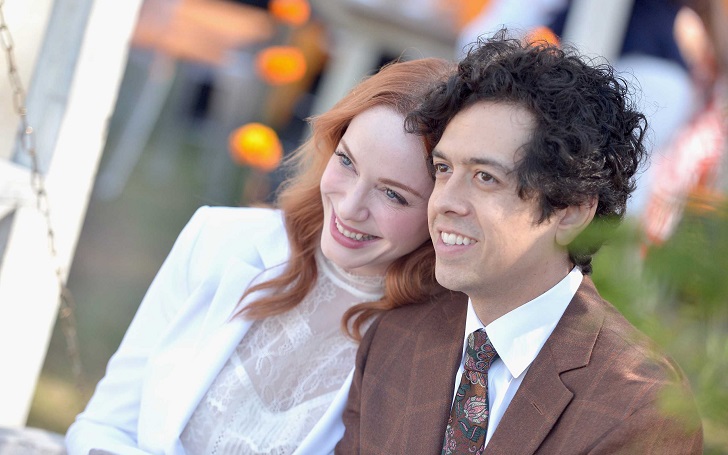 Christina Hendricks and her husband Geoffrey Arend called it quits after 12 years of a loving relationship.

The 44-year-old 'Mad Men' star Christina Hendricks and her spouse Geoffrey Arend announced that they are parting ways through their respective posts on Instagram on Thursday, October 17.

The mutual split announcement came less than a week after their 10th wedding anniversary on October 11. Although, fans probably suspected trouble in paradise since neither of them celebrated the occasion on social media.

"Twelve years ago we fell in love and became partners. We joined our two amazing families, had countless laughs, made wonderful friends and were blessed with incredible opportunities," the post on both their Instagram accounts read. "Today we take our next step together, but on separate paths. We will always be grateful for the love we've shared."

The couple had no children together, but it was an obvious fact that they co-owned two dogs together when following through their social media accounts. "We will be taking time to rediscover ourselves in this transition and we thank you for your patience and support in giving us the space to do so," the statement concluded.

The first dog they got was a Cockapoo named ZouZou, and the second was a Cavalier King Charles Spaniel named Tatiana. They are all over Geoffrey's Instagram page.

The couple bought ZouZou back in 2013.
Source: Geoffrey Arend, Instagram

The signs were there before too; Christina was not wearing her wedding ring at the 10th Annual Veuve Clicquot Polo Classic in California a few days before the anniversary. But a day before the announcement and several times before, she was getting all nostalgic with photos from the past Halloweens.

The duo met in 2007 after being introduced by her 'Mad Men' co-star Vincent Kartheiser ('Pete Campbell' on the show) and soon fell in love after getting to know each other better. Then on October 11, 2009, they tied the knot in New York.

The couple made the decision to not have children in an interview back in 2014, telling Health magazine, "We've decided that we are not really interested in having children. It seems like it's expected that you'd want to have kids.It's just very normal for people to say, 'Well, when you guys have kids...' And then when I say, 'Actually I don't think we're going to do that,' people will say, 'Oh, you say that now...' It doesn't bother me, though."

The decision came in contrast to Christina's feelings soon after she met the 41-year-old. In 2012, she recalled how he was freaked out when she told him she wanted a family with him after they started dating.

Despite wanting a family upon dating Geoffrey, Christina decided against having a baby.
Source: Mad Men, AMC

Despite parting ways from their personal lives, they likely will still remain connected through their professional lives though. Without invading their privacy, we hope for a better future in the careers of the two people here.

Visit GlamourFame for more Entertainment news on your favorite celebrities.