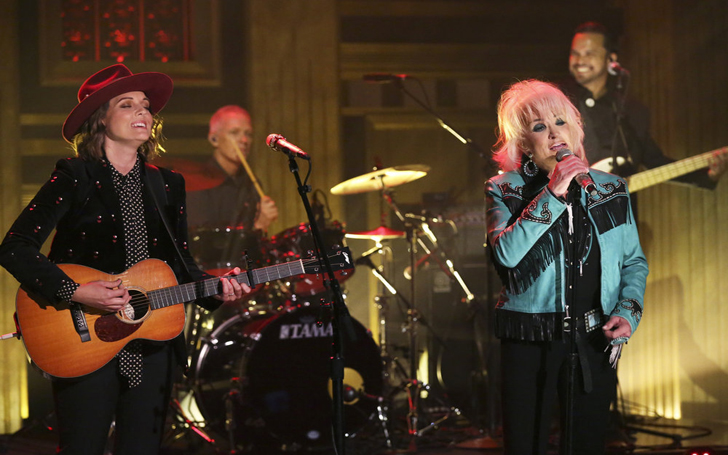 Tanya Tucker and Brandi Carlile made their way to The Tonight Show where they performed their new song 'The Wheels of Laredo.'

The outlaw country singer Tanya Tucker is back with a new album after over a decade since the last time she released an album, 'My Turn'. The album was a moderate success in 2009 with the performance earning her a 27th spot in the U.S. Billboard Top Country Albums chart, and she is back touring and promoting her new album, 'While I’m Livin’, and on one of her pit stops, she visited The Tonight Show with her band.

The Tonight Show Starring Jimmy Fallon was one of the stops for Tanya Tucker where she brought out her band and also a special guest to perform alongside her. Brandi Carlile was out her hat and a beautiful guitar to back the country legend, and the beautiful new song from Tanya’s new album filled Studio 6B inside the Rockefeller Center.

Watch: Tanya Tucker and Brandi Carlile close out The Tonight Show Starring Jimmy Fallon with 'The Wheels of Laredo'

Jimmy introduced Tanya and Brandi Carlile, and she was on the stage with her band performing the song The Wheels of Laredo. Tanya’s raspy and deep voice turns smooth when she sings, “I would float across the southern skies of blue.” With the backing vocals and Carlile giving her a smooth transition which leads both successful ladies into the line, “But I’m stuck inside the wheels of Laredo.”

It was a great performance by the singer whole rose to prominence at the age of 13, now she is 60, and still, the passion for music and country is still in her voice and every swing and move she makes on the stage. Her first hit song ‘Delta Dawn’ is now almost 50 years old now and still, the flair and the heart is still present in her performance which isn’t hard to believe, it’s just beautiful to see.

Considering the singer never got the love from the Grammy’s, her fans make sure she gets the respect she so wholeheartedly deserves. Brandi was also there to support the singer and also because she is featured heavily in the entire album with most of the production duties and also additional vocals handled by the talented singer.

Tanya and Brandi closed out the night gracefully for Jimmy who played host to Kendall Jenner and Desus & Mero in the night. Though the star powers were there in the night, the obvious winner for the whole show was the 60-year-old who sang her heart out for the large studio audience.

Watch: Kendall Jenner plays pour it out with with Jimmy Fallon the same night Tanya was on

The Jimmy Fallon episode aired after the 100th season of NFL kicked off on NBC with the oldest rivalry on the NFL, Bears, and Packers getting in Soldier Field to renew their age-old rivalry. Packers went in their greatest rivals’ home field and came away with a W, their first away win in forever. So, it was a good night for us; Bears held the L and Tanya ended the night for us in a one-two punch of endless fun.