Netflix's Daybreak: What to Make of *Spoiler's* Villainous Turn? When is Daybreak Season Two Coming? 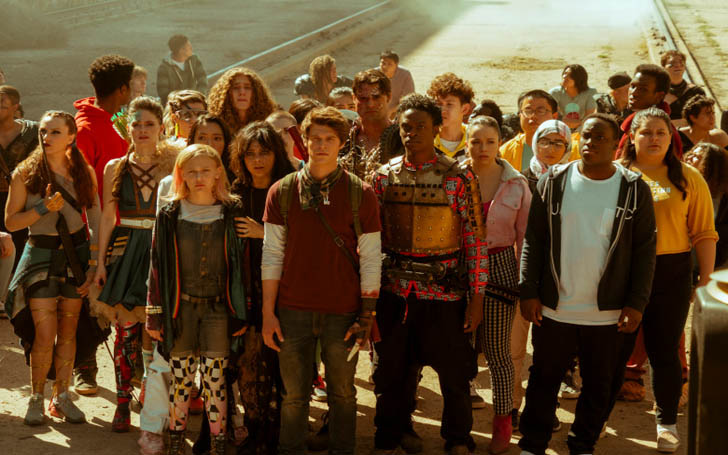 Spray can rattle – okay, so 'Daybreak' happened, a half-decent post-apocalyptic “I need to save the love of my life form a world overrun by flesh-eating monsters” story, and it was decent to start, great characters meant we stayed and then the big finale is what really turned the most heads because saying things went sideways would be an understatement.

For people still on the fence about seeing 'Daybreak,' do yourself a favor and get through the first couple of episodes, you will love it. Also, you better bail right now because we are doing a head-first dive into some major spoilers. You’ve been warned; the next sentence will be about the finale of 'Daybreak,' but, if you don’t care, please, do stay.

Watch: The trailer for the first season of 'Daybreak'

There was a big nuke in the finale of 'Daybreak,' and to be honest, the biggest blast was not the nuke, which was launched into space and exploded in the sky. The big explosion happened after the joy and jubilation of all the kids left in Glendale subsided, and a new villain emerged from the ashes of 'Baron Triumph,' and it was the liked-by-everyone, 'Sam Dean.'

What to Make of the Villainous Turn by Sam Dean in the Final Moments of Daybreak Season 1?

The story was heading for a generic ending, and we were not expecting much from the story in the first place and thought the end of the season would be with the two lovers reuniting and living happily ever after. But, oh no, there was more to the story of 'Daybreak' than we gave them credit for, and the final twist in the finale was ample proof the story is just not a teenage rom-com wrapped in an apocalypse type of thing.

There is more story to be told, and the almost villainous turn of 'Sam Dean' proved the generic story of 'Daybreak' is not so generic after all.

The final minutes of the show were winding down, and we were getting ready to move on when we thought 'Josh' was going to ride off into the sunset with his love. Then, he said the words “I love you,” and we thought that’s the end, but nope. 'Sam' gets up on the truck and says the people need a leader and then proceeds to sit on her crown while the Jocks kneel for their new leader, a new villain was created on the show to deal with in the second season of the series.

Well, we did not see that coming at all, and though the show was passable at best, the final twist made it all worth it. But 'Sam Dean' and her tendencies were there for all to see, and how we were not able to see her as the villain is a massive success of the show. Sam, as she said herself, was the sorting hat of the high school, someone who knew everyone and knew who should be with who to be happy and succeed.

Watch: The clip from the finale of Daybreak where Sam Dean becomes the villain

As she saw 'Baron' die in the cornflakes factory, something clicked in her head; she’s been the adult of the school for a long time, so, why let anyone be king when she can be it the sovereign ruler of all the kids in Glendale, she knew everyone anyway, and everyone liked her. Don’t get us wrong; we all need an authoritative figure, but the way 'Sam Dean' seized power was the rise of a dictator and not someone who was elected to be in charge.

Sam may be a hero in someone else’s book, but if history’s taught us anything, people are better when they are led but not ruled. The path Sam is headed on seems like the only place it will lead her to is to become a better and more ruthless version of 'Turbo,' and it seems Daybreakers are in for a fight for the survival of Glendale when and if Daybreak returns for a second season.

When Will Daybreak Season Two Arrive?

Netflix is known for taking its time when it comes to renewing TV shows and considering 'Daybreak' is not the same property as The Witcher franchise, which was renewed for a second season before the first one even premiered, we will need to wait till the end of December to know if Netflix will renew the show for a second season.

The streaming giant often takes about 45 days to determine whether they want to pick up the series for a second season. Well, the fans are gradually coming around to the show, and most of the responses are positive. The finale also helped build some buzz for the second season of 'Daybreak'; there is high possibility Netflix will give 'Daybreak' another trip around the sun, and when they do, we will be ready for season 2 of 'Daybreak.'

Before you leave, make sure to head on over to our Movies & TV Shows section for more information on upcoming TV shows and movies. Also, do not forget to visit Glamour Fame to be in the know of all the happenings in the world of show business.