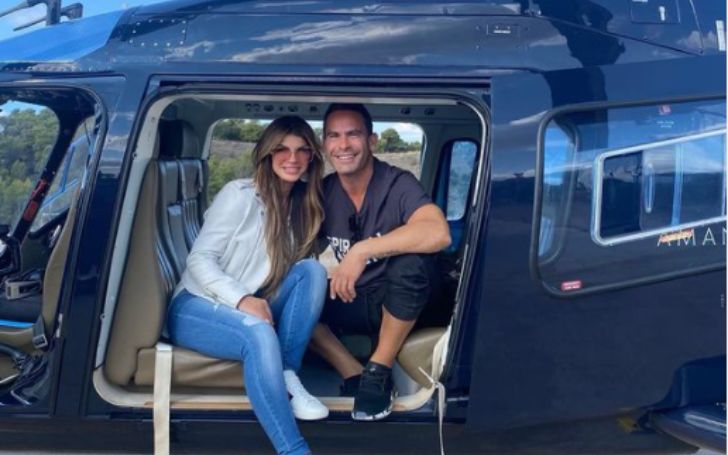 An American television personality, Teresa Giudice, officially got engaged with her long-term boyfriend, Luis Ruelas, a businessman, and philanthropist on Tuesday, October 19, 2021.

According to People, at the Amanzoe Resort in Porto Heli, Greece, Luis questioned Teresa by incorporating sparklers, candles, roses, a violinist, and fireworks for their next step in the relationship.

During that romantic candle-lit beach proposal, "The choreographed fireworks display illuminated a 'Marry Me' sign as Louie got down on one knee. Teresa was completely surprised." And undoubtedly, Teresa said yes.

For their engagement celebration, they celebrated until 5 a.m., drinking champagne and dining on lobster, sea bass, and lamb chops at the resort's restaurant, Nama. Also, Teresa's close friend and former RHONJ costar Dina Manzo and her husband Dave Cantin were also part of their big moment.

Some outlets confirmed in November 2020, Teresa, 49, was dating the businessman about two months after she and her ex-husband Joe finalized their divorce.

Teresa is a mother of four with her ex-sweetheart Joe. She has welcomed daughters Gia, 20, Gabriella, 17, Milania, 15, and Audriana, 12. Later, she opened up about the possibility of marrying Luis during an appearance on Watch What Happens Live with Andy Cohen in March.

As host, Andy Cohen popped the question on what about exchanging the vows or the relationship is just casual, Teresa states, ''I mean, you know, I feel it, so we'll see what happens.'' Later she added, ''I really feel like he's my soulmate."

Teresa told Cohen, "Louie wanted to go to the Bahamas and meet [Joe] — which I thought was the most amazing thing ever." She added, "He said he just wanted to talk to him and let him know he's not trying to take his place or anything. But he just wanted to meet him, 'cause I have daughters."

Remember us for more information on celebrity news and updates on Glamour Fame.