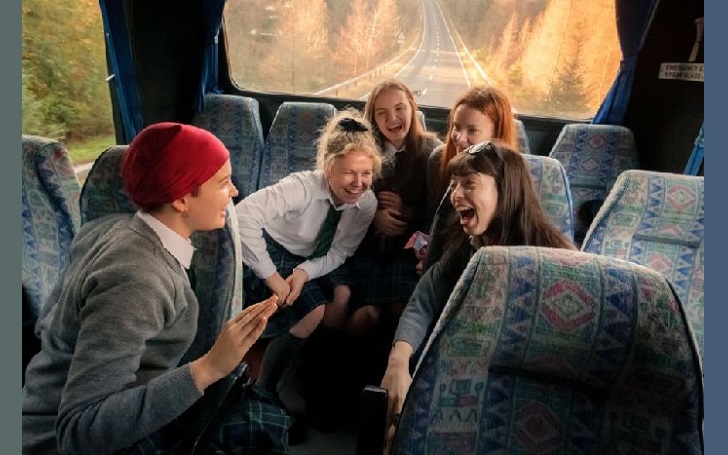 'Our Ladies' will be released as the new coming-of-age drama in Scotland.

The first images for Scotland's newest big feature film, 'Our Ladies', has been released. It is an "unvarnished coming-of-age" story that focuses on the exploits of a group of teenage choir girls from a strict Catholic school during a bus-trip to Edinburgh in the Highlands.

The feature film is adapted from Alan Warner's best-selling 1998 book, 'The Sopranos', by director, Michael Caton-Jones. While it will be unveiled this weekend at the London Film Festival, where it is tipped to be one of the highlights, the first multiple has already been released.

'Our Ladies' is set to be the next big feature film for the Scottish media.
Source: Sony Pictures International Productions

Marli Siu, Sally Messham, Rona Morison, Tallulah Greive, Eve Austin and Abigail Lawrie are among the cast full of girls "more interested in drinking, partying and hooking up than winning any prizes". They are a somewhat unknown group of casts breaking through the rebel-film.

Caton-Jones secured the rights to turn the book into a movie 20 years ago, but only announced the production last year in the Hollywood trade press which dubbed it as 'Pitch Perfect meets Trainspotting'.

Since optioning Alan Warner’s novel in 1998, the project's development has been a labor of love. It was always fundamental that the spirit of these fantastic strong female characters was brought to life accurately.

The movie was shot in Fort William, Edinburgh & Glasgow, and set in the mid-1990s. It was the era of 'Trainspotting' being one of the defining British films of the decade, also set in Edinburgh. 'Our Ladies' is also expected to feature a series of musical numbers since Roddy Hart & Tommy Reilly, Scottish singers and songwriters, are heavily involved in its soundtrack.

The locations used in Edinburgh include the Liquid Room music venue and nightclub, technology incubator Codebase, the West Register House archives building on Charlotte Square. The Grassmarket, Princes street, Rose Street, Fleshmarket Close and North Bridge were the other locations some scenes were filmed.

Several actual locations in Edinburgh were in use throughout the movie.
Source: Sony Pictures International Productions

The book was also adapted for theater which was launched at the Edinburgh Festival Fringe, four years ago, by Lee Hall for the National Theatre of Scotland. It went on to win an Oliver Award after being transferred to London's West End.

In the London Film Festival guide, programmer, Manish Agrawal mentioned that it was "a pitch-perfect evocation of the possibilities and frustrations of being young and riotously alive in mid-90s Scotland."

Manager of the Film Edinburgh commission, Rosie Ellison stated, "It was a pleasure to support this Scottish feature film and help bring the director’s vision of 1990s Edinburgh to the screen."

Everyone related to the movie's production is super-excited for its release.
Source: Sony Pictures International Productions

Set over the course of a single day, this is a fresh coming-of-age story filled with energy, wit and raw humor.

Stay tuned and connected to GlamourFame for more articles on Movies & TV Shows.