Phoebe Bridgers Smashes Her Guitar and Monitor During SNL Performance 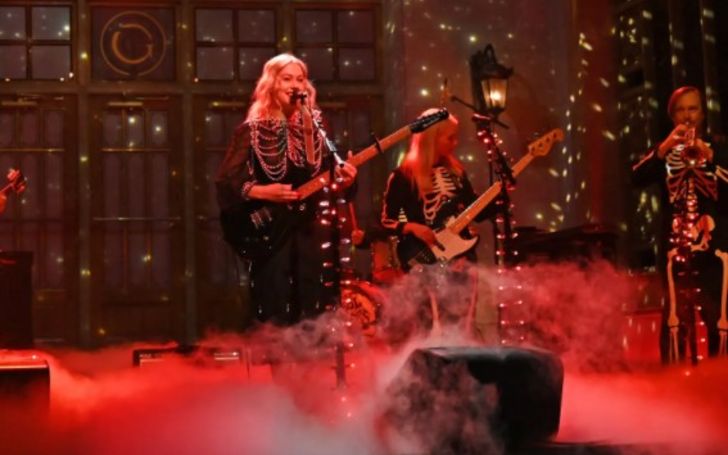 Phoebe Bridgers appeared as the musical guest on Saturday Night Live on February 6. It was her first SNL performance, which the singer-songwriter managed to make memorable. How?

Well, Bridgers ended her show with a fine act. Precisely speaking, she was up for two songs. She performed "Kyoto" and "I know the End," and while ending her performance with the latter, she smashed her guitar against her stage monitor.

The American star Bridgers smashing her guitar at the end of her performance on SNL.
Photo Source: Pitch Fork

You read that right, Indie rocker Bridgers smashed her guitar on SNL at the end of her show. Both of the songs she sang on SNL last night was from her Grammy-nominated album "Punisher."

Besides showing up for her SNL performance, the 26 years old star recently appeared on a new song, "Favor," which was written by her boygenius bandmate Julien Baker. Furthermore, she was also part of the song called "Ten Feet Tall." It is one of the tracks of Pasadena singer-songwriter Charlie Hickey.

Talking about Bridger's musical style, she has been categorized as indie rock, indie folk, and emo folk, which often centers around acoustic guitar and incorporates atmospheric strings, production, and electronic instrumentation. Moreover, her music is described as "anxious", "melancholy," and "haunting," plus lyrical themes include death, trauma, therapy, depression, and strained relationships.