Relive All 33 Of Columbus' Survival Rules In Zombieland 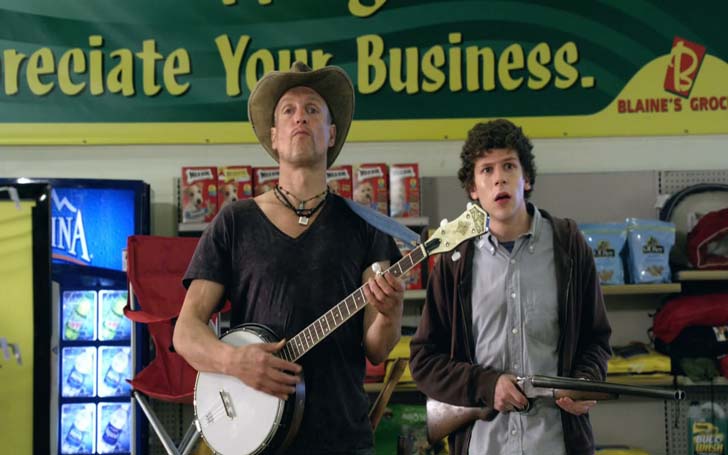 Zombie apocalypse or apocalypse as a whole is a favorite instrument for Hollywood to showcase the baser instincts of human behavior. Most of the times the apocalypse films don’t really work with audiences, but Zombieland was one of the very few that clicked with the viewers because of its funny and likable characters.

One of the fan favorites of the movie has to be Jesse Eisenberg’s character 'Columbus' and his rules for surviving a zombie apocalypse. Columbus is not a muscular guy, and he needs to be vigilant to survive in a world where zombies roam free all over the world, so he has a set parameter of rules to follow, to not get stuck in sticky situations.

Starring Woody Harrelson, Jesse Eisenberg, Abigail Breslin and a break out performance by Emma Stone, the movie was released back in 2009, and since then it has enjoyed cult status. Since the very start of the film we see Columbus following his rules, and even though all of the rules are not shown on screen, there are some that were released through extra materials from the film.

So, here is the complete list of the 33 rules to surviving a zombie apocalypse compiled by Columbus in the movie Zombieland.

Well if you are running from a zombie horde than you need good cardio, the dead don’t tire, and you need to have good cardio to make your escape.

It is always a good idea to shoot a zombie on the floor, do not think a zombie is dead because it is on the ground. Double tap that sucker.

One of the most vulnerable places that you can be during a zombie apocalypse is a bathroom. You don’t want to be caught in a stall while your pants are around your ankles, make sure the bathroom is clear and then lock the door. A person needs his/her privacy in the bathroom, don’t let a zombie ruin that.

While you are traveling on an apocalyptic road, it is not always a smooth ride as road are clogged with both undead and dead cars. Always, buckle your seatbelts because you never know when a crash might happen.

The reason in the movie, they don’t know each other’s name is because they have given everyone a nickname, so they don’t have to feel guilty when someone dies. It is a difficult world to survive, a zombie apocalypse, avoid attachments as much as you can.

Yup! Get a Cast Iron Skillet, because as Tallahassee puts it, the feel of it hitting someone is like nothing else and oh yeah, after you finish, you can cook an omelet on the Skillet, well after a thorough cleaning that is.

Well, when a zombie horde is coming your way you don’t want to be carrying a duffle bag and a roller suitcase. Get a backpack and use only essentials; it is going to help out when you are running.

8. Get A Kickass Partner

You can go out on your own if you want, but that is not advisable because many zombies are roaming around. Get yourself a kick-ass partner, someone you can trust, and you are ready for someone to watch your back.

9. With Your Bare Hands

There is limited ammo for you to work with, so when you are low, don’t forget about your hands. Punch some fear into the zombies, use your fists and then run.

A zombie can only be put down by blowing its brains out; why would you want to swing low; you aren’t going to harm the zombie. Always swing high, zombie can’t duck, and you need to blow its brain, so practice swinging high.

Feet are the most essential tool you can have in Zombieland, the best use is to run away but if push comes to shove, be ready to kick some ass and bash some heads in.

The zombie apocalypse is, let’s say, very moist, bile, gut, blood, pus and many unwanted fluids all over. It is a good choice to keep some paper towels with you in case you don’t want to be rolled in weird fluids all day.

If you are having bad luck finding food or useful utensils just shake it off and don’t let that get to your head. Also, it is a good idea to shake off any zombies that are coming your way.

14. Always Carry A Change Of Underwear

If you are lucky, you might survive longer during a zombie apocalypse, so it is a good idea always to carry a change of underwear because after using it inside out there aren’t many options left for you and also it is a bad idea to stink.

It is a very impractical tool to use during a zombie apocalypse, but if you want to cause some serious head trauma, then a 16-pound bowling ball will do the trick. You can also use a sturdy bag to turn it into a potent extension of your arm.

Well, this is a very sound rule; when zombies are attacking being a hero is not without a plan is the way to get you killed. Columbus himself breaks this rule, but he had a plan, so plan ahead people.

You don’t want to get your back stuck while swinging or blow your rotator cuff while swinging a bat. So, it is a good idea to limber up your hands and feet so as to get a full range of motion.

When you are on the road with people for a long time, there are bound to be some fights among survivors. It is a good decision to break it up, or zombies are going to attack, and you will die.

Surviving in a zombie apocalypse is a marathon, so keep this mantra in your head surviving is a marathon, not a sprint. You need to pace yourself and not burnout right at the start.

Watching a stripper running down a street trying to eat, you can seem funny, but it is not. So, it is a great idea to avoid strip clubs so as not to get stuck.

Before you start scavenging, case out the building first to know all the exits, so that you can make your exit when you get surprised. Zombies can appear at any time, so be vigilant and know all the exits to make a hot escape.

This is the same as the paper towels; there are enough troubles during a zombie apocalypse to worry about moisture. Keep your entire dry essentials in a ziplock bag and store it somewhere safe.

Thumbs help grip things, and in a close fight, you can use your thumbs to squish a zombie’s eye. Don’t hesitate to use your thumbs; your survival may depend on it.

The zombie apocalypse is not the time to be worrying about harming someone if it feels like a zombie, shoot it, don’t wait around.

Shoelaces can trip you up and just don’t lace your shoelaces, tie it around tighter because it will always help you run faster. Oh yeah, avoid those huge sneakers, get some tennis shoes, tie laces tighter and then be careful.

When you are fighting zombies a lot of blood, gut and brains are flying around, mud you can remove from your clothes after washing, but blood and brain matter is a little harder. Fresh clothes are hard to find in an apocalypse so always carry a stain stick to get rid of stains from your clothes.

Buddy System is essential because you don’t have eyes on the back of your head. Using a friend gives you a better chance of clearing a particular area, but also when you get hurt or fall down, a buddy can always come to your assistance.

30. A Little Sunscreen Never Hurt Anybody

Vehicles and fuels are very hard to come by in the apocalyptic world, and sometimes you have to walk miles upon miles in the sun. So, pack some sunscreen and use it because a little sunscreen never hurt anybody.

A safe haven is a good thing, and a car represents safe heaven, and while running, you might just drive away but always drive after you look in the back seat. You never know, a zombie might be lurking in the backseat.

Small things can make you happy like twinkies make Tallahassee very happy. Running and hiding is one thing, but doing what you love is also good to keep a sane mind. So, when you get the time, enjoy the little things that you can find, you never know when you can rest up again.

Swiss Army Knife is an essential tool as it has almost all cutting and picking tools so search for a swiss army knife, it is going to come in handy.

Zombieland isn’t a place for people who just want to wing it if you're going to survive for a long haul, you need some structure and some rules to make sure you do not do something stupid. Columbus’ rules are funny, but they are also practical, so in case there is a zombie apocalypse take these rules to heart.

Also Read: Why Is The Walking Dead Comic Ending? How Will It Impact The Show?

As for the Zombieland sequel, it is coming on October 11, 2019. With only three months out, we still don’t have a trailer but this week’s comic-con may have something for the zombie apocalypse fans. And oh, the title of the sequel is Zombieland: Double Tap, based on the second rule of Columbus’ rules.