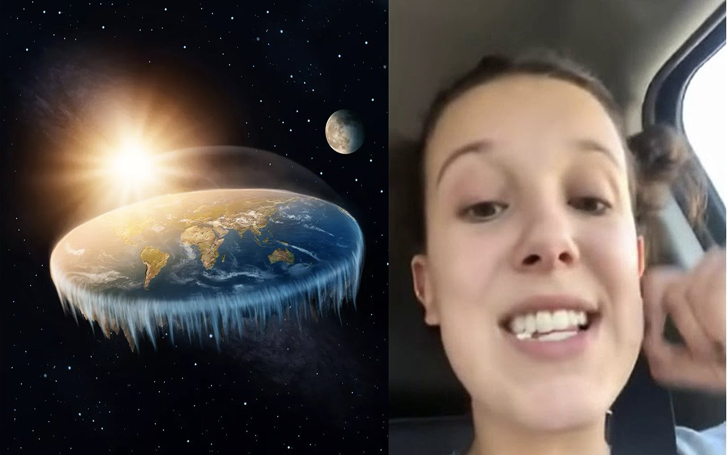 Millie Bobby Brown of Stranger Things, thinks the earth is flat, get the reason why.

Earth is not flat, let’s just get the facts out of the way, there are no proofs saying the earth is flat and in no certain terms the “experts” on flat-earth conspiracy can ascertain to the fake story they are peddling, the earth is flat. For people who got out of the showing of 'Thor' and saw Asgard and the ocean falling off into the abyss, it is fiction, if the floating hammer and golden city didn’t give it all away, then we will confirm it for you.

The reason most real experts don’t even dignify the stupidity of earth being flat is because they are not going to waste their time explaining the fundamental building blocks of our civilization. Earth is oval in shape with a flat surface at the poles and bulge at the equator; this is the definition everyone learns when they are in second grade. The whole reason of people being taught about the earth being oval in shape in the early part of a student’s life is to allow the little minds not to get bogged down in the fundamental facts of the world.

There is a massive young pre-teen and teenagers who are her fans and followers on Instagram. So, think of this for a second, we’ve got a bad habit of idolizing actors and actresses and now imagine for a second the type of impression Millie is leaving on the little kids who will then go to school and adamantly tell their science teachers the earth is flat.

Children should not be getting a science lesson, whether false or true, from 14-year-olds sitting in a car. Millie can think what she believes in, the politics or sports or certain people, but saying the earth is flat is like saying the sun rises from the west. It is questioning the fundamental believes of the world, which is irrefutable.

Watch: Millie Bobby Brown explains to her fans she is a falt-earther

Millie told her fans, “We were watching a conspiracy theory the other night and let me tell you. Guys, there are so many facts that it’s flat. I mean, think about it. Like, think about it. I mean, guys, you don’t even know. I think I am a (she searched for the word in her brain) Flat Earther.”

Well, the facts she was talking about were nowhere to be found and then she pointed her viewers to the YouTube content creator Shane Dawson who did a piece on a flat earth and used some “proofs” to say the earth is flat. The teenage mind is impressionist, every new thing can leave an impression on a young brain, and we can understand the way the videos are produced and the “facts” are presented may make it all seem like truth. Our editor just talked about he himself almost getting sucked into the world of flat earth theories on Reddit. He talked about how convincing it all sounded, and for a moment, he thought the earth was flat. Our editor is older than Millie, and even a rational person like him was almost taken.

This is what conspiracy theory does to people, we go in to validate our way of thinking, and when the “facts” are presented to lineup even a fraction with the belief, then people become believers. Millie also was most probably convinced by the way all the theories were lined up for her and other people. They are not scientists who spent their life and career studying what makes our earth ticks. Maybe down the line, she will see the earth is not flat, but then the end of the video shows the mindset she was in then.

Watch: The song Millie starts singing at the end of her flat earth video

The implication of what she said was heavy than at the end of the video; she starts singing ‘In My Feelings’ by Drake. It is just bizarre and weird at the same time and shows what she means when she is talking about the earth being flat.

Whatever the case, it will be interesting to hear from the actress what she thinks the upside-down of a flat earth is going to look like. If the ocean falls of from the edge of the flat earth won’t the monsters living on the upside also fall into the abyss? Well, next time, she is doing one of her Q&A on Instagram about how Stranger Things is supposed to work on a flat earth.

Before you go, make sure to click on the Entertainment section to get more information on all of the Stranger Things stars. Also, do not forget to visit Glamour Fame to get all the news and gossip on all of your favorite celebrities.