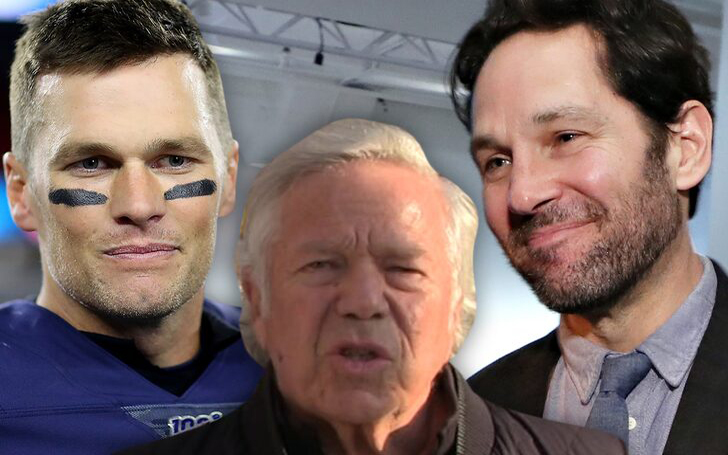 Tom Brady said his appearance in the show 'Living With Yourself' was not a jab at Robert Craft.

'Living With Yourself' finally made its debut on the streaming platform Netflix with the horror-comedy show making available all eight 25 minute long episodes of the show up from streaming. The show stars Paul Rudd, and no matter how you feel about how the series ended, there is another reason why it is getting a lot of traction and attention on social media.

The reason people are not really talking about the series and only the first episode of the show is because of the cameo appearance by Tom Brady in the opening episode of the series. Tom Brady was a surprise addition to the show, and he appears in about a 10-second long clip uttering two lines of dialogue.

But it is not the dialogue people are honing in on; it is the surrounding of the place where he is coming out. In the first episode, the illustrious player comes out of a spa in a strip mall, and people were quick to point out the whole thing was reminiscent of the trouble Robert Kraft went through with the law enforcement in Miami.

A little background for the series, in 'Living With Myself' the leading character of Miles gets a recommendation for a spa where he can come out as a new person, but the thing is the spa kills the old person and uses the person’s DNA to make a clone while also transferring brain function.

Tom Brady, it seems, also uses the place, and when Miles is uncertain of the whole surrounding, Tom comes out of the place, and Paul Rudd’s character is dumbstruck. Tom asks Paul’s character, “First Time,” to which he replies, “Uh-huh. You?” And Brady responds, “Sixth,” and then goes off in his black SUV.

The six is obviously a reference to the number of titles the player won in the NFL, but people were quick to point out the surrounding of Tom and the lines they connected between the Florida incident of the owner of 'New England Patriots.'

After a lot of noise, the player needed to clarify his position, which prompted him to talk with Boston.com and ESPN. The player said, “I think there’s a lot of things that are taken out of context, that you choose to make a headline of as opposed to understanding what it’s about.”

“That's not what that was about,” the player explained. “I think that was taken out of context, just like you're taking it out of context and trying to make it a story for yourself, which has a negative connotation to it, which I don't appreciate. It was meant to be something different than that. The fact it's a distraction or you're bringing it up is not something I want to be talking about.”

Watch: The video of Tom Brady responding to the Spa controversy

It was not all; the player also clarified the mall was not real, he shot his scenes in green screen, and now people are making a big issue of the entire situation. Tom also explained the scenes were filmed recently, but the script was written four years ago, and he agreed to do it one year ago before Robert Craft was even charged with solicitation.

The six-time super bowl champion also told the media, he is not going to Robert Kraft because he’s already got a great relationship with the team owner, and since there is no issue here, there is no need for the player to clarify his position to Mr. Kraft.

Watch: The trailer for 'Living With Yourself' on Netflix

Before you leave, make sure to click on the Entertainment section for news and gossip on all your favorite celebrities. Also, do not forget to visit Glamour Fame to be in the know of all the happenings in the world of show business.