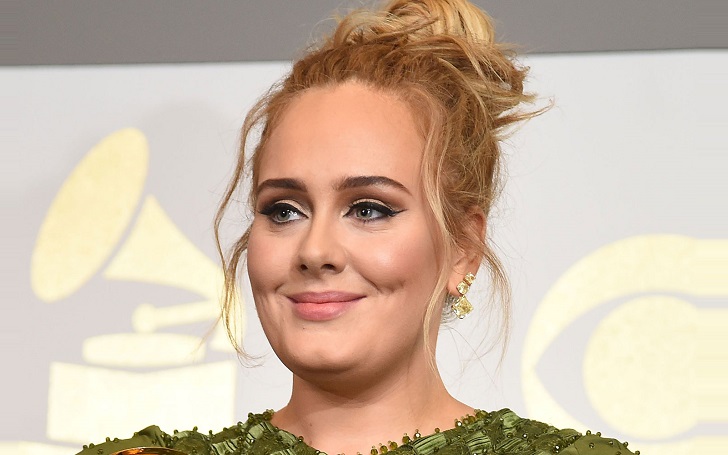 Picking up where she left. Adele dons her amazing weight loss look at the Christmas Party she recently hosted.

First, here is the entire intricate details of Adele's weight loss story, down to every last word she's said about her body.

Ever since her divorce in April from husband, now turned ex, Simon Konecki, we've noticed a huge change in her figure. While she throws out the idea that 'Gym sucks', the cardio training and Pilates she did since then, have really paid off.

Back in July, the 31-year-old was reported to have lost about 14 lbs. When she wore the black, off-the-shoulder gown at Drake's 33rd birthday party, people really started talking. In a positive way of course. Then at her own Christmas Party, her weight loss efforts showed real fruit as she mastered a black plunging, silk dress with photos of her with 'Grinch' and 'Santa Claus'.

"We both tried to ruin Christmas but then both our hearts grew!" the 'Hello' singer wrote as the caption of the Instagram post. "Thank you for coming to my party and making us feel like kids Grinch 💚 Merry Christmas and Happy Holidays everyone x".

The comment section of the said post is overwhelmed with praises of her stunning figure, but there were also the curious ones that wanted to know when she would be releasing new music again. Her last single was 'Send My Love (To Your New Lover)' from the album '25', which she premiered at the Billboard Music Awards 2016. Her weight loss figure was first prominent at that video premiere.

While many fans have been asking what the secret to her amazing reported 40-50 lbs (actually about 20 lbs) weight loss transformation is, she's not talked about it publicly to anyone. Nor is there any need to. But there are things that she said related to it (again the link given at the start of the article).

However, there are concerns about her health. Fans are worrying the divorce was too much on her and might've have reduced her weight in the process. But ever since she came out for her first public appearance in a long while at Drake's party, she's been seen living it up and making the most out of life.

The split from her baby-daddy after seven years together means she might be releasing a new album again soon with similar inspiration like she had for every other album. Meanwhile, she's been romantically linked to rapper Skepta, but whatever the gossip-world says, she's finally heading towards a happier path.

Stay tuned and connected to GlamourFame for more Entertainment updates. There are more Adele stories; check them out with the tag links below.