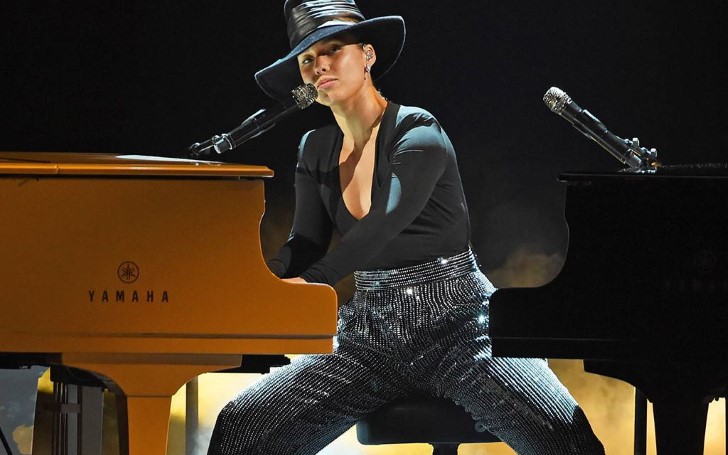 While hosting the star-studded event Alicia Keys delivered one of the jaw-dropping performances in the evening.

The 15-time Grammy-winning singer delivered an extraordinary performance during the 61st award show.

The singer played a medley of different songs which she wished she had written while playing two pianos, midway into the show on Sunday.

Initially, the 38-year-old started with the song ”The Entertainer “ on two grand pianos.

Read more: Charlie Puth is "Terrible" at Teaching People How To Play Piano

According to Alicia's rep, Sunday's performance was a homage to the pioneering pianist, Hazel Scott whom the singer paid tribute to before starting her performance.

"I've been thinking so much about the people and the music that have inspired me, and I want to give a shout out to Hazel Scott because I always wanted to play to pianos."

"You know those songs that live inside of you and live inside of me, and you just love it so much, because it was done so well that you wish you wrote it?

That's how I feel about these songs. I wish I wrote them."

Afterward, Keys effortlessly switched to Kings of Leon’s 2009 hit "Use Somebody", Drake's absolute tune "In My Feelings", Ella Mai's "Boo'd Up" and finally, finishing with Lauryn Hill's classic feel-good song "Doo-Wop (That Thing)".

A big part of friendship is showing up for your girls—that’s why I was thrilled to be there for the one and only @aliciakeys at the #GRAMMYs. She is one of the most genuine and thoughtful people I know—there’s no one better to help us all celebrate the unifying power of music! pic.twitter.com/8cMhTmsClA