Dave Bugliari - Some Facts to Know About Alyssa Milano's Husband 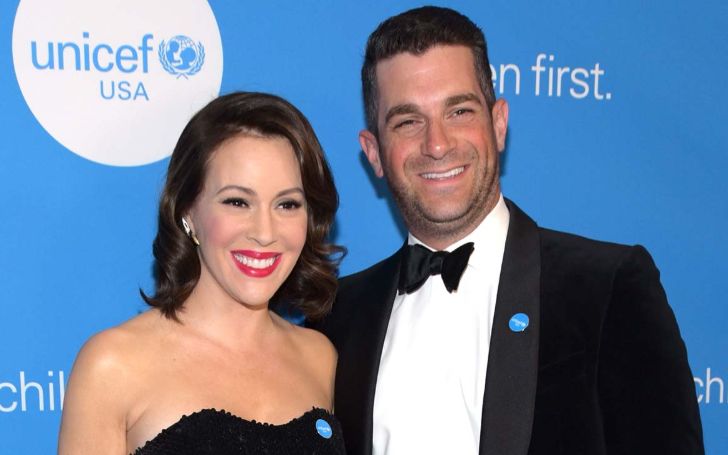 Get quick facts on Dave Bugliari - the love of life of Alyssa Milano!

Love conquers all; a perfect reflection can be found in the love life of Dave Bugliari and Alyssa Milano. Both of the love birds come from the entertainment biz, where Dave is a Hollywood agent and mainly performs his work behind the screen. However, Alyssa is an American actress, activist, producer, and singer who frequently makes her appearance in several media.

Due to their work nature, details related to Milano are more available to the world compared to her husband, Bugliari. As a result, we brought you brief information on the prince charming of the beautiful artist Alyssa.

So, without any further due, let us delve into the topic and get to know about the fortunate man.

The Creative Artists Agency agent, Dave Bugliari, celebrates his birthday on December 17. He is the youngest child of his father, Miller Bugliari, and mother, Elizabeth Bugliari. The 39- years-old Bugliari has two elder siblings in his family, Miller Boyce and Anthony Stewart.

Focusing on Dave's academic success, there isn't much detail on it; however, with some deep dig into the topic, we found out that he was quite an athletic child. He even captained the soccer team while studying at Pingry School in Martinsville.

Dave Bugliari is Eight Years Younger Than His Wife

You might not know but let us break it down to you guys; Dave Bugliari is eight years younger than his gorgeous wife, Alyssa Milano. The actress was born on December 19, 1972, in Bensonhurst, Brooklyn, as the daughter of fashion designer and talent manager Lin Milano and movie editor Thomas M. Milano.

Despite their age difference, the pair shares a beautiful family. The $6 million net worth holder and his partner exchanged engagement rings in December 2008 and took martial vows on August 15, 2009. They got married in New Jersey at the Bugliari's family home.

After bounding into a marital relationship together, the lovebirds presumably live a happy life and, until today, expanded their family by welcoming a son, Milo Thomas Bugliari, and a daughter Elizabella Dylan Bugliari.

The beautiful celebrity couple gave birth to their first child Milo in 2012 and then welcomed Elizabella in September 2014. Even though both Dave and Alyssa are hooked up with their busy schedule, they do find a gap to spend quality time with their children.

Dave Bugliari Wasn't The First Choice of His Celebrity Spouse

Now, if we focus on the relationship history of 'Who's the Boss?' actress Alyssa Milano then Dave Bugliari isn't the first guy she chooses to spend her life with. In 1987, she was involved with "The Lost Boys" actor Corey Haim. However, their relationship ended in 1990, after facing trauma due to Haim's addiction.

Dave is the second husband of the actress Milano.
Photo Source: Pinterest

Subsequently, after three years, Dave's wife was engaged to actor Scott Wolf in 1993, but they didn't make out, and the ex-pair broke off their engagement the following year. After some down in Milano's love life, she took marital vows with singer Cinjun Tate on January 1, 1999. Still, the former couple couldn't preserve their relationship for more than a year, and early in 2000, they took separate paths with a divorce.

After a first marriage failure, Alyssa lived with a broken heart for a year, and between 2001 to 2003; she dated her co-star Brian Krause. Finally, after gaining lots of experience from her unsuccessful relationship, she found her true happiness with CAA agent David Bugliari.

The couple was perfect for each other, and since then, the pair has become an excellent example for lovers. They got engaged in December 2008 and less than a year later tied the knot in August 2009.