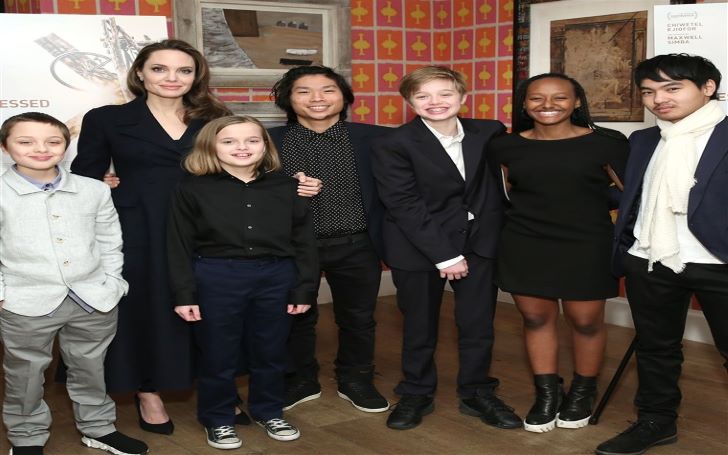 Angelina Jolie's brood showed their support to mother at the premiere of 'Maleficent: Mistress of Evil'.

Angelina Jolie and her five out of six children stole the spotlight at the red carpet premiere of the 'Maleficent: Mistress of Evil' at El Capitan Theatre in Los Angeles. Well, the actress turned the premiere into the family affair with her brood.

Angelina, who is starring as the horned fairy Maleficent in the movie, slew in a black one-shouldered Atelier Versace gown. The skintight dress featured a silver scorpion brooch clasped at the waist.

Jolie-Pitt's children also looked no less in their stylish outfit. Pax, 15 rocked in a black shirt with grey holster and statement white trainers while his younger sister, Zahara, 14 looked stunning in a black strapless dress with her hair braided.

The 11-year-old Vivienne opted casual black and white dress with a denim jacket while her twin, Knox wore a colorful turquoise and black blazer. Shiloh rocked in a white shirt, trousers, and trainers underneath a leather jacket.

The Oscar-winning actress's oldest son, Maddox,18 couldn't attend the event because he was in South Korea for his college studies. However, her younger children showed their full support to their star mother.

The 'Wanted' star previously revealed in an interview with People that her kids love seeing her portray “strong” characters on screen. She said,

What’s really moving to me is that they want to see me strong, and so it’s less to see me in a film, but they’re just happy I will be strong and having fun.