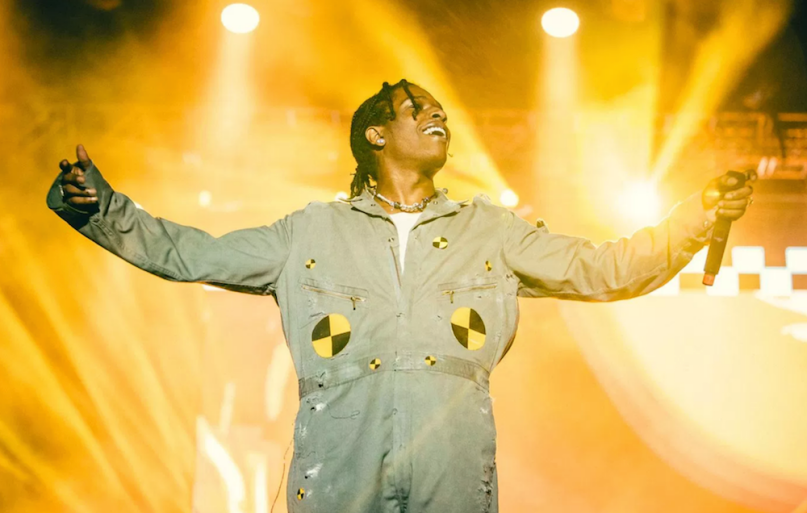 Rakim Mayers, famously known as A$AP Rocky, comes under widely-known artists in the music industry. ASAP Rocky is renowned for his experimental approach to music, his flair for fashion, his penchant for psychedelic drugs and his prolific love life.

The American rapper burst on the music scene in 2011 soon after released his chart-topping albums' Long.Live.A$AP' and 'At.Long.Last.A$AP.'

Artists in the rap game are known to have tattoos sometimes just for the 'look' or being expressive about their art and creativity. A$AP is no different, he's got prominent tattoos on his body, which symbolizes certain things he believes in.

ASAP Rocky is the most successful member of A$AP Mob who has always been in the limelight because of his unique style of music, his great sense of fashion (which helped him to gain high profile brand collaborations)

According to Body, Art Guru, the rapper all together has nine different tattoos.

There is a tattoo of a 'Cross' on his right knee, which represent the spirituality and religion beliefs. It refers to the crucifixion of Jesus and faith in him. The rapper also made a song 'On God' along with Asap Ferg, YG, and Tyga expressing his spirituality and trust on the divine power.

Rocky shows immense love and support towards his gang, and the Tattoo is just another way of showing appreciation.

There is the Anarchy symbol tattoo on his left thigh. Anarchy refers to a group of people without any governing bodies who reject hierarchy. The rapper's merch also has an anarchy symbol.

The rapper's got another 'ANARCHY' tattoo near his left knee. In an interview with Vice Asap, said, "I'm an anarchist man, I'm all about the people who don't give a fuck about colors and all of that dumb shit. You know it sounds good, especially me in my position saying it, but even if I were poor, I would still be saying it."

If not now then when is tatted on the rappers right thigh. Generally, "If Not Now Then When" is used as a motivational quote which prompts a person to take immediate action on any task or job that they know that they inevitably will have to complete or take action on at some point in time.

'ASAP life' is tatted across his stomach. A$AP mob is an American hip hop collective formed in 2006. Although ASAP Rocky was not one of the founding members of the group, the rapper is one of the most famous members of ASAP mob.

The word 'Dare' is tattooed just above Rocky's right knee, right below the 'if not now then when' Tattoo. Generally dare refers to having courage to do something, rocky is known to have rebellious ideas and dare is just something that's adds up to it.

The 31-year-old has a Pirate tattoo near his left knee. Pirates is considered to be hardened by nature; the Tattoo can also be used to show the unshakable attitude of the person wearing it. The tattoo can also symbolize courage and determination.

The rapper's got an unknown tattoo on top of his left hand, which is unidentified.

For the success of the album, the rapper's former girlfriend, Aussie rapper Iggy Azalea got Tattoo on her fingers, which had 'Live. Love. A$AP'

Back in the year 2012 rapstress revealed in an interview that Iggy and A$AP have taken their relationship to the next level and have gotten matching tattoos.

The Australian rapper was in a high-profile relationship with A$AP Rocky, and she wanted to honor their commitment by getting "Live" "Love" and "A$AP" tattooed across her fingers.

Azaela is now engaged to NBA player Nick Young and began the tattoo-removal process back in 2014. Though her reps have not confirmed the tattoos are completely removed, the photos are leading many people to believe they're finally gone.

Find out: A$AP Rocky Has Officially Been Charged With Assault In Connection To An Incident In Stockholm

Asap Rocky is one of the prolific artists in the music industry today. Many fans has gotten his face tattooed. Also, people are fond of the kind of tattoos he has on him, rappers like Post Malone, Lil Yachty, Lil Peep are famous for their extravagant tattoos.

Tune into glamourfame.com for more stories on your favorite celebrities.