Check Out Kendall Jenner Stripping Nude For A NSFW Photoshoot! 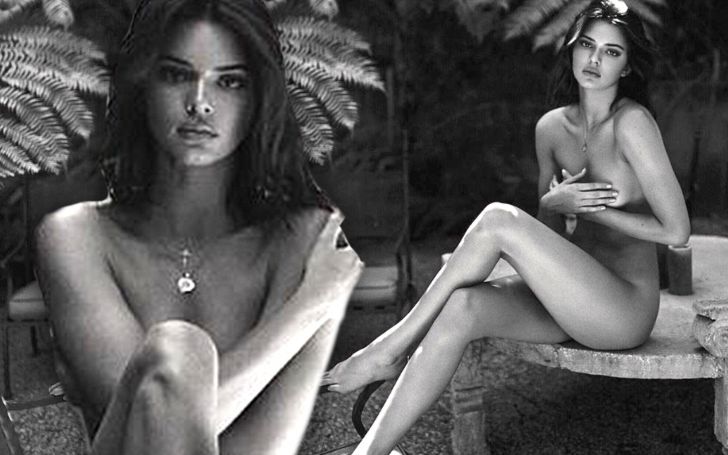 Keeping Up With The Kardashians star Kendall Jenner astonished millions of fans posing a hot nude picture as she stripped out slaying the recent photoshoot shared this Friday.

Well, the photoshoot was done by none other than Mert Alas, yes the same fashion photographer who snapped One Direction star Liam Payne fully naked.

This time, though, the fashion photographer Mert posted a couple of black and white themed snap of nude Kendall, censoring her women parts with a mark on it.

On another tempting photo Mertis wrote, “You can’t sit with us !@kendalljenner#goddess.”

While some might think the nudity was unnecessary but it's a clever move by Proactiv, a skincare company.

Posing totally naked the pictures spontaneously caught the attention of more than 10 million fans on social media this weekend.

Kaila Methven Goes Completely Naked - Poses in Nothing But Diamonds >>>

Moreover, Jenner even took the steamy snap to her Instagram page. Where momma Kris Jenner, sister Khloe Kardashian and some of her showbiz friends Hailey Bieber like the snap.

However, this is not the first time two of the fashion mogul featured on a project together as previously they worked on 2018 Vogue's April cover and Alice in Wonderland themed spread on December 2015 issue.

Moreover, this is not the first time Kendall stripped naked too as previously she and her Kardashian sister's all have amazed us with their luscious pictures.

As a matter of fact, Kendall's astonishing pic was taken days after sister Kylie Jenner shared her alluring photo from her recent vacation with her close friends and daughter Stormi Webster.

So, much of things are happening with the irresistible sisters, stay tuned and connected to find updates on Keeping Up With The Kardashian stars.