home Entertainment Chris Distefano Girlfriend - Is the Comedian Dating Someone in 2020?

Chris Distefano Girlfriend - Is the Comedian Dating Someone in 2020? 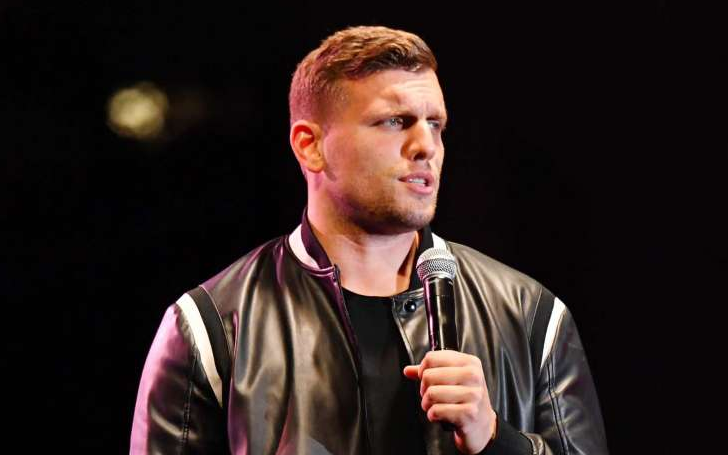 Chris Distefano is an American comedian, who is better known for his stand-up gigs. The comedian, who was born on August 26, 1984, came into prominence after appeared as casts of MTV's shows, 'Guy Code,' and 'Girl Code.' He was thoroughly loved by the viewers, which helped him on his next project.

After a successful stint on MTV shows, the comedian released an hour-long special titled 'Chris Distefano: Size 38 Waist,' which was aired in Comedy central. The special was released in 2019, which helped him on his career further. After his special, the comedian started co-hosting 'History Hyenas' with Yannis Pappas.

Moreover, the 35-year-old comedian hosts his show, 'Stand-Up with Chris Distefano. Distefano started late, as he was busy with his study and other career choices, but sudden interest in the 'stand-up' scene proved fruitful for the 35-year-old. He followed his passion, and he seems to be doing pretty well.

While it's no surprise, Distefano is excellent at what he does best, but we wanted to know if the comedian is dating someone or he is too caught up with his work? We will try to answer just this, so let's find out if Chris Distefano has a girlfriend.

Chris Distefano Girlfriend - Is the American Comedian Dating Someone?

Chris Distefano does not have a girlfriend in 2020.
Photo Source: Impractical Joker Cruise

It breaks our hearts to break it to you, Chris Distefano is, sadly, still single. Wrong are those who say humor gets you the girl. The smart and witty guy is still single in 2020. But that was not the case a while ago. Rewind a few months; he was happily in a relationship with his former girlfriend.

Chris's former girlfriend is Carly Aquilino; According to the reports, the former couple started dating back in 2013. But unfortunately, After more than seven years, two decided to part their ways. While it's still unconfirmed why the former pairs chose to part their ways, but the news of their split came on February 20, 2020.

The former couple welcomed their first child, daughter, Delilah, in 2015, a year after into their relationship. The couple was doing so well in their relationship, and their love was evident on their social media.

It was back on January 1, 2016, where the 35-year-old comedian couldn't stop telling the world how grateful he was for all things in his life. More importantly, he was thankful that he found Carly, with whom he welcomed his daughter.

The comedian on his post wrote, "These two girls changed my life. 2015 was the best year of my life. Thank you [Carly] for giving me our beautiful Delilah. I'll love you both forever. Have a safe NYE tonight whenever you may be. I'll probably be asleep before midnight with my girls."

Also Read: Who is Michael Le? Some Facts to Know About the Choreographer

Chris further added, "I'm happy. I hope 2016 is great for everyone. I have to go now and eat some type of Puerto Rican meat. Pollo? Who knows, guys. Btw I know I'm going to get yelled at after I post this by [Carly] because her toes aren't in the picture, and her shoes 'are like so cute, right?????' I love you all. Happy New Year."

Some Speculations About Chris Distefano's Break Up

While there is no statement from the star comedian himself, but according to some fans, the former couple was not getting along very well after years into their relationship. The only piece of information available right now is, Carly was the one who was not happy in the relationship.

The 35-year-old comedian tweeted about his relationship status on February 20, 2020, where he stated, "My girlfriend dumped me yesterday because she said I can't build anything. I said, what about all these walls I have put up emotionally?."

Well, it's not our business to poke our nose too deep into their issues, but what it seems, Carly left because she was not satisfied with Distefano financially. It's just assumption, and we are yet to hear from the comedian himself, what really happened between them.

You May Also Like: Who is Ondreaz Lopez? - Here's Everything You Need to Know About This TikTok Star