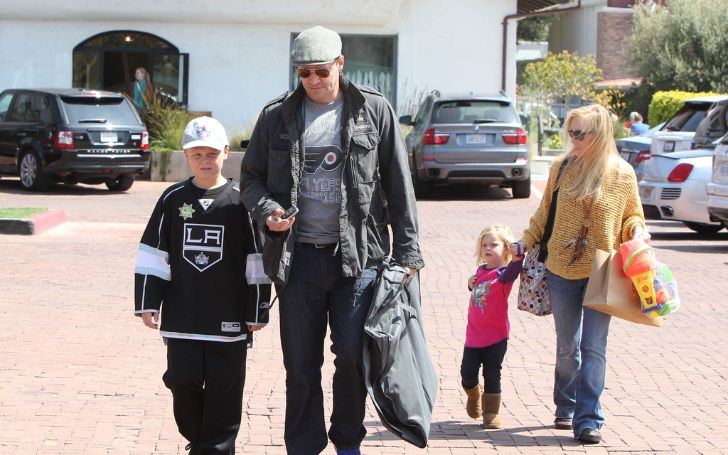 David Boreanaz is a doting father of two: Inside his family life here:

David Boreanaz is a television producer, actor, and director renowned for portraying the roles of vampire-turned-private investigator Angel on "Buffy the Vampire Slayer "(1997–2003) and continuing his role in the drama's spinoff Angel (1999–2004). He has also worked on BONES (2005–2017), a television crime series, and the military drama series SEAL Team (2017–present).

Many fans consider David a bonafide TV legend. With many credits under his belt, there remains no doubt about his career being anything but a success. However, what about David's married life? BONES star wedded twice but welcomed kids with only his current wife.

David Boreanaz is a Doting Father of Two

David's marriage with his first wife, Ingrid Quinn, lasted from 1997 to 1999. Following their divorce in 1999, Boreanaz moved on with actress Jamie Bergman and announced his engagement in August 2001. David and his second wife tied the knot on November 24, 2001.

Jamie is an American model and actor. Bergman gained recognition after appearing as Playboy's playmate of the month in January 1999. She met Boreanaz at Valentine's Day party at the Playboy Mansion in 2001.

The couple has two children altogether, one son, Jaden Boreanaz (Jaden Rayne Boreanaz), born on May 1, 2002, and one daughter, Bella Boreanaz (Bella Vita Bardot Boreanaz), was born on August 31, 2009.

David's kid, Bella, played an episode in 11x18 The Movie in the Making Bones (2005). Like his daughter,  Boreanaz's son, wife, mother & father have all had small cameos on Bones.

Check Out: Who are Katie Nolan's Parents? Learn About Her Family Life Here

David admitted to cheating on Bergman with nightclub manager Rachel Uchitel; David Boreanaz confessed that he had been cheating on his wife, Jaime Bergman, for nearly nine years, in 2010.

What Has David Boreanaz Been Working on Since Bones Ended?

For any young fellow actor, securing a starring role in a pop culture experience is a dream. The idea of getting a role in not one but consecutively three such mega-hits is a huge feat few even dare to consider. However, for David Boreanaz, the impossible was accomplished with his roles in "Buffy the Vampire Slayer," its sequel "Angel," and "Bones."

With no break between projects, the star spent two decades in iconic roles on beloved television series. When "Bones" ended in 2017, one might have expected Boreanaz to take a much-needed break. Nevertheless, as one of the hardest-working actors in television, he ultimately dived into another project instead of resting on his glory.

Recommended: Who Are Kristi Noem's Children? Learn About Her Family Here!

Just six months after the "Bones" series finale, "SEAL Team" premiered on CBS, starring Boreanaz, who serves as one of the show's executive producers. In the military drama, Boreanaz plays the character Jason Hayes, the leader of one of the Navy's elite special-ops forces, who struggles to balance his commitment to protecting his country and the responsibilities of raising his children as a widowed father.

A bit into David Boreanaz's life!

David Boreanaz was born in Buffalo, New York, on May 16, 1969. At the age of seven, the family moved to Philadelphia, Pennsylvania, due to his father's work. Boreanaz's father is of Italian descent, and his mother is of half-Slovak ancestry.

After graduating from college with a degree in filmmaking, he started playing extras in movies. Apart from entertainment, he also cherishes the moment with his family, which he loves the most.