home Product Dunk-a-roos Is Coming Back — Learn the Facts

Dunk-a-roos Is Coming Back — Learn the Facts 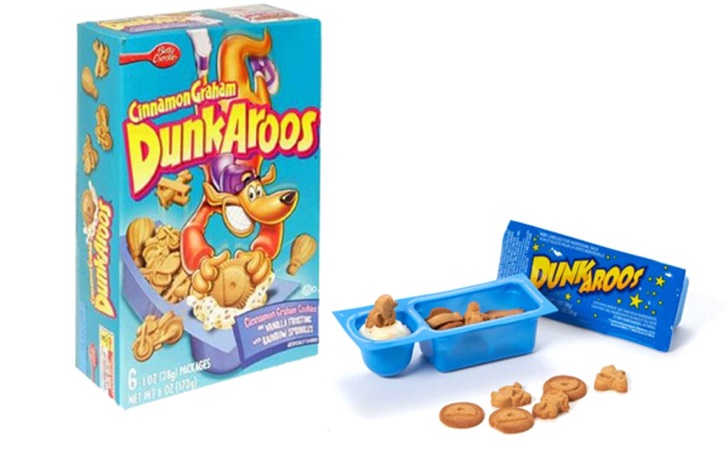 '90s kids have something to cheer about again. Their favorite snack, 'Dunkaroos', is coming back to the shelves.

It's not like they created Cheesy-Puffs (probably a pun to Cheese Puffs) after 'Eric Cartman' started eating too much of it in 'South Park'. But 'Dunk-A-roos', which, let's face it, was a hugely popular snack since being discontinued in 2012, is back.

The rip-offs are really going to rue the day they tried to copy it. After years of suffering through the lack of the snack and petitioning for it to come back, Jeff Caswell, president of Snacks at 'General Mills', released a statement in the company's blog post about relaunching the product with its original flavors intact.

Dunk-a-roos Is Coming Back This Summer 2020! But Why Was It Discontinued?

In the blog post, Caswell stated, "We're thrilled to relaunch Dunkaroos in the U.S. after years of it only being available in Canada. For those who grew up in the '90s, the original cookie-frosting combo represents the taste, color and fun of being a kid during that decade. We know there's a lot of love for Dunkaroos, and fans everywhere have been asking for it. We're excited to help '90s kids relive all the best parts of childhood."

Dunkaroos was first launched in 1992 with an inspiration from the slam dunk mascot 'Sydney the Kangaroo'. Originally, there were five shapes the snack came in, along with chocolate or vanilla frosting to dip the graham crackers in. They later added four more flavors of frosting.

The snack was discontinued in the US in 2012, and only the kids in Canada apparently knew the true happiness like '90s kids.

However, according to Snack History, the crackers and dip started appearing in kids' lunchboxes since 1988. But the slow decline in the number of customers in the late '00s couple with restrictions in advertisements was not boding well with the brand.

Although Betty Crocker has yet to pinpoint which factors contributed to the stop of Dunkaroos' production, things were not the same for the brand.

Apparently, Kim Kardashian Is the One to Thank for the Return

After the food was discontinued in 2012, fans of the snack were asking for the company to re-release the food in the US (hope there were no Dunkaroos-smuggling at the border).

There are more than just one petition on Change.org to revive back Dunkaroos. The rate probably is two in every year. Yeah, it was hard to keep track after so many started it.

However, all their efforts seem to have been in vain, especially after Betty Crocker failed to keep her promise of ensuring a revival if Luke Kelly's post exceeded 150,000 retweets. He stated he had a good authority from General Mills to bring them back, and sure enough, the post crossed well over 180,000 retweets.

Either way, it seems Crocker's promise took a bit of time to materialize, and there's no need to scream at them for now.

While there have been many "other" factors for Dunkaroos coming back, most simply go back to Kim Kardashian-West's 2019 Twitter request to credit for its return. Because, well, you know, she's famous for being famous. But she had just shared Kelly's post, remember that.

And after her wish was fulfilled, she was obviously one of the most excited fans. Plus, the company's first-ever Twitter post was a wish-granted type for Kardashian's earlier post. Th brand also acknowledged Kelly's post.

Regardless of who was it that really got the company to relaunch the product, there's no denying everyone who's eaten it as part of their snacks are more than excited for the revival. Some are so restless; they even want it launched right now.

As if there weren't signs that the snack was coming back, we were totally blindsided by every other thing to ignore that the brand had quietly joined social media.

More than a week before the official announcement, on January 26, 2020, Dunkaroos already had an Instagram account. It's verified already. The first post was made that day with a photo of one of their frostings and captioned with the emoticon that had eyes giving a shrewd look.

We're apparently living under a rock for a week.
Source: Dunkaroos, Instagram

It took too long for the fans to notice it. It was already hinting of a possible relaunch, which was so much near. Comments started pouring in only since a few days ago but before the announcement. Joe Jonas seems pretty excited. Meanwhile, Sean Taylor and Brittney Marie Kelley are just in shock.

Check Out: The Best Makeup Products for African-American People

The Twitter post, meanwhile, only came near the announcement, with the first one being a retweet for Kardashian-West's wish. That account, too, was formed in January 2020. How could we've missed it???

Nonetheless, Dunkaroos is coming back. Whether it will become a commercial success like it did back in the day or if it will only retain the old fans, is another topic to be discussed. Keep checking back for more.

Stay tuned and connected to GlamourFame for more Entertainment and Products content.