home Entertainment 'Earth, Wind & Fire' Inducted Into the Kennedy Center Honors As the First African-American Group to Do So

'Earth, Wind & Fire' Inducted Into the Kennedy Center Honors As the First African-American Group to Do So 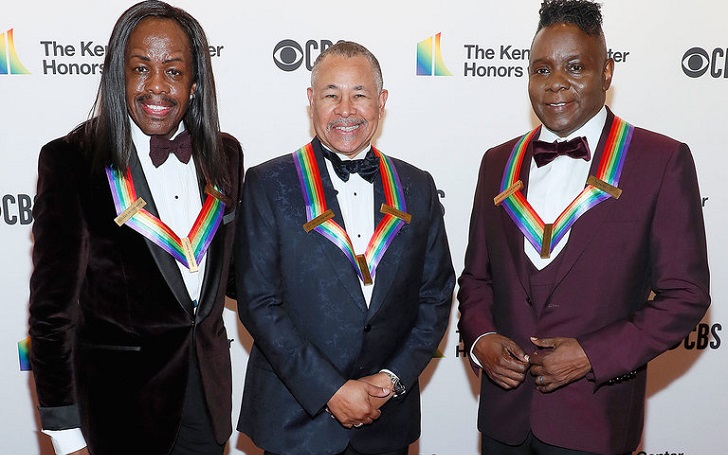 The fusion band, 'Earth, Wind & Fire' becomes the first African-American band to get inducted into the Kennedy Center Honors.

The legendary 1900s fusion band, 'Earth, Wind & Fire', made history this Sunday, December 8, as they attended the 42nd Annual Kennedy Center Honors at Kennedy Center Hall of States in Washington, D.C., as they became the first African-American to get the honor.

The band's original members, those still alive, Philip Bailey, Ralph Johnson and Verdine White, attended the event as 'Boogie Wonderland' co-writer, David Foster, introduced their tribute segment. It made the audience dance up to their hits, which were delivered by the likes of Cynthia Erivo, John Legend, the Jonas Brothers and Ne-Yo by forming an ensemble finale of one of their hit songs. EWF founder, Maurice White, who passed away back in 2016, was also remembered throughout the event.

Of course, their infamous track, 'September', was the song that was rejoiced by the aforementioned artists. It is one of those few 20th-century songs still relevant and celebrated by music fanatics all over the world, especially after September 21 was declared the 'Earth, Wind & Fire Day' by the Los Angeles City Council three months ago.

For those of you who haven't heard the song yet, the first line of the first verse of the lyrics goes like this, "Do you remember? The 21st night of September?" Yeah, a real celebration. And we encourage you to grab your headphones and groove to it. You'll know what the hype is all about.

Linda Ronstadt, Sally Field, Michael Tilson and the group, 'Sesame Street', rounded out this year's last class as many prominent members, including 40 members of the Congress, attended the event.

The coming summer will mark 50 years of the official existence of the group, the members of which, as V. White described, had "a special chemistry from day one, because we were all hand-picked by Maurice. He had a vision and he knew what he wanted, so here we are."

You Might Like: Kevin Smith and Anthony Daniels in Tears Because of the C3PO Scene, Reveals Director J.J. Abrams

The group also hinted on a possible new duets album, but didn't make the mistake of slipping in the important details of potential collaborators. Considering the music genres (R&B, soul, funk, jazz, disco, pop, rock, dance, Latin, Afro-pop, you name it) they so extensively span, it will, no doubt, be a special one.

"We're making a list, and checking it twice," Bailey stated. "And you’ll hear about it soon." He also believes this landmark for African-Americans in the KCH is the first for many to come in the future.

The event will air on CBS coming Sunday, December 15, at 8 pm. There are still more exciting news to come.

Stay a bit longer for more Entertainment content on GlamourFame from your favorite celebrities. Keep staying in touch.