home Entertainment Eminem Turned Down $100 Million to go out on Tour With Dr. Dre Snoop Dogg and 50 Cent

Eminem Turned Down $100 Million to go out on Tour With Dr. Dre Snoop Dogg and 50 Cent 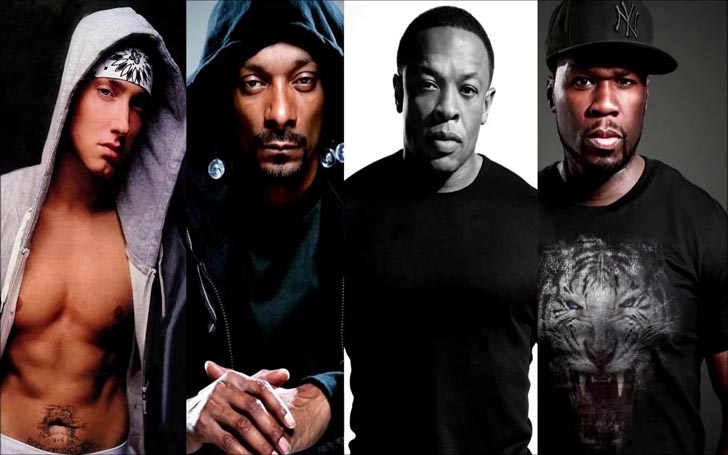 According to 50 Cent, Eminem said no to a joint tour with Snoop Dogg, Dr. Dre and 50 which would've made a hundred million!

$100 million is a lot of money and according to 50 Cent; the whole crew would’ve jointly brought in over a hundred million dollars if they went out on the joint tour scheduled with everyone involved which included 50, Dr. Dre and Snoop Dogg. 50 Cent was in Los Angeles and talking to the people over at Big Boy TV, then the 'Get Rich or Die Trying' artist revealed how much money was left on the table because 'Shady' said no.

It wasn’t like Slim Shady didn’t want to go out on tour with the whole crew, it would’ve been legendary, but the reason for the man not wanting to go is also simple, he just didn’t want to be far from Hailie over a long period of time. The tour dates were stacked and the way it was all laid out, the tour would’ve taken a huge chunk of everyone’s time, and Eminem who rarely goes out on tour was hesitant to leave Hailie over an extended period of time.

Fifty said, “You do not believe how much money we would’ve made. And Em was like — there was so many dates at the time the way they laid it out — that he was like, ‘I just don’t want to go on tour and come back, and Hailie’s grown.’”

Eminem loves his daughter; there is no denying any of it; we’ve seen what happens to people when they try and get the Real Slim Shady’s daughter involved in anything. Ja Rule was buried alive by the whole Aftermath crew, and then Eminem lit him up and buried his again when he mentioned the name of his daughter. There was the almost pedophile tweet by 'Machine Gun Kelly', who was stripped naked and spanked for all to see when Eminem delivered his ‘Killshot’ track.

Watch: The diss song by Eminem aimed at MGK

Marshall Mathers loves his daughter, and now it is for all to see how much he cares for her also, turning down the type of money he turned down on a joint tour is something unthinkable, but he did it for his daughter.

50 Cent is doing the rounds of all the prominent radio shows, and he was in LA when the rapper also popped by the Real 92.3 headquarters and talked to the people over there about the new Eminem joint coming pretty soon. The rapper said Eminem sent him a track and they were working on something, also stating the highest-selling rapper of all time was in the studio cooking something.

There were some rumblings of the rapper coming at the head of 'Lord Jamar' after the ‘Stan’ rapper posted a cryptic tweet where he was almost saying he is coming for some people in the industry and now 50 just confirmed he got a track from Eminem, maybe a new album is on the horizon, heck only a diss track to 'Vlad' and Jamar would do, but in a way they are waiting for the track.

The irrelevant Jamar is making his money sitting on someone else’s couch and a white dude is milking every little insult he can to make money on his back, and the dude talks about being from the hood. If Em does put out a diss track, then it will only give those two more material to work with.

Whatever the case, we are excited for a new 50 and Em joint, it’s been like forever since the two went HAM on a track together. 50 Cent is currently promoting the final season of Power and while on promotion the rapper also joked about wanting to direct a Marvel movie after directing his first episode on Power. Make sure to follow 50 while he is promoting; he is dropping some serious information on past and present happenings in the rap industry.

Make sure always to keep it locked in with Glamour Fame for more news, gossip and editorials on hot button topics and your favorite celebrities. Check out our Entertainment section, we know you’ll love it, we’ve got something for everyone. And like always, head on over to Movies & TV Shows to see what is happening with your favorite programs and upcoming and past great films.