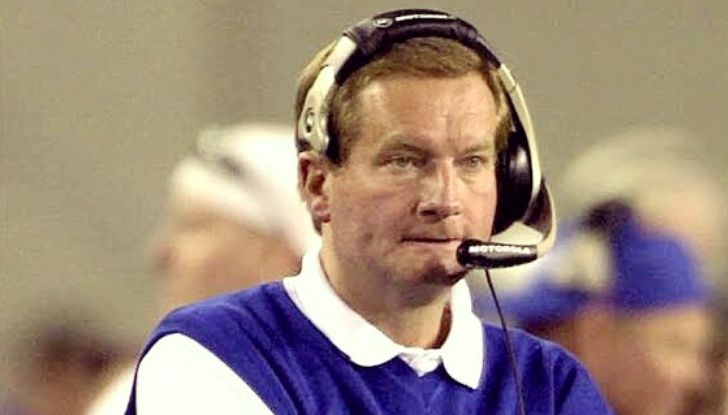 James Edward Fassel, professionally known as Jim Fassel, has sadly passed away on June 7, 2021, aged 71. Fassel was a former coach of NFL's New York Giants from the year 1997 to 2003. The Giants announced and mourned his death in a press release.

A rep of the Giants reported that they were informed by a close friend of Fassel's family. The cause behind Jim's unfortunate death is cited to be a heart attack. Sources tell that Jim was rushed to a nearby hospital with chest pain on Monday, where he died under sedation.

Jim was rushed to a nearby hospital with chest pain, where he died under sedation.
Photo Source: Pats Pulpit

Fassel's son, John Fassel, the team coordinator of the Dallas Cowboys, also confirmed the news to USA Today. Jim's career as a professional player was a brief one; the California-born led the Giants to the playoffs three times during his tenure and worked with Baltimore Ravens and Las Vegas Locomotives.

Jim was named NFL coach of the year after his first season. The sports world mourns the death of Jim; his close associates are paying tribute to the late coach and recalling him as a kind individual and accomplished professional.

Check Out: Floyd Mayweather vs. Logan Paul Exhibition Bout Ends Without a Knockout

Giants' president and the chief executive officer, John Mara, wrote, "On behalf of the Mara and Tisch families and our entire organization, I would like to express our condolences to the Fassel family and Jim's friends." Mara goes onto describe Fassel's legacy in a lengthy eulogy.

Giants and The Broncos mourn the death of Fassel.
Photo Source: KSNV

The current Ravens coach John Harbaugh, football placekicker Graham Gano also expressed their grief over Jim's death on Twitter. The Broncos, in their official statement, said, "We're saddened to hear of the passing of former Broncos Offensive Coordinator (1993-1994) Jim Fassel. Our hearts go out to the Fassel family." Jim was survived by his four kids and his wife, Kitty Fassel.