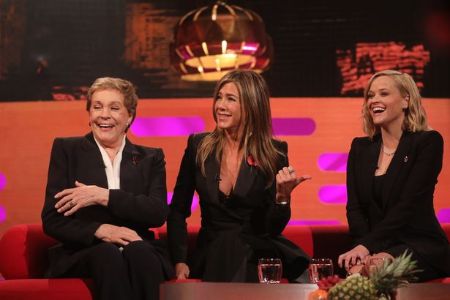 Jennifer Aniston admitted on her last day of filming the hit T.V. show Friends she stole a neon light from Central Perk.

When asked what she stole from the 'Friends' set after ten years on the show, Jennifer Aniston gave the sweetest answer.

Aniston, who played as 'Rachel Green' for ten years on the iconic sitcom F.R.I.E.N.D.S. didn't shy to share some behind the scene naughty stuff on The Graham Norton Show last night.

Jennifer was actually there to promote their new series 'The Morning Show' joined by Resse Witherspoon, and British icons Sir Ian McKellen and Dame Julie Andrews.

Jennifer, you took a bit of Friend when you left at the end, didn't you?

And Jennifer gushed back:

I took all five of them," as the audience burst out with "ahhh.

The Friends star appeared on the Graham Norton Show
While it's been 25 years since Friends first hit our screens, Jennifer has maintained a close friendship with her co-stars Courteney Cox, Matt LeBlanc, Matthew Perry, Lisa Kudrow, and David Schwimmer.

Jennifer, 50, did admit to taking the light-up neon coffee sign from Central Perk, which now sits in her office.

Check Out: Jennifer Aniston Just Opened Up About her Successful Married Life and Children >>>

The news comes right after Jennifer, 50, who made headlines by setting the record of being the fastest Insta follower after she uploaded the reunion cast snap of F.R.I.E.N.D.S.

The 50-year-old star held the record of being followed by millions in just twelve seconds overcoming Prince Harry and Megan Markle.

Hope you enjoyed the article, stay tuned and connected to find more intriguing Entertainment articles of your beloved celebrities on Glamour Fame.