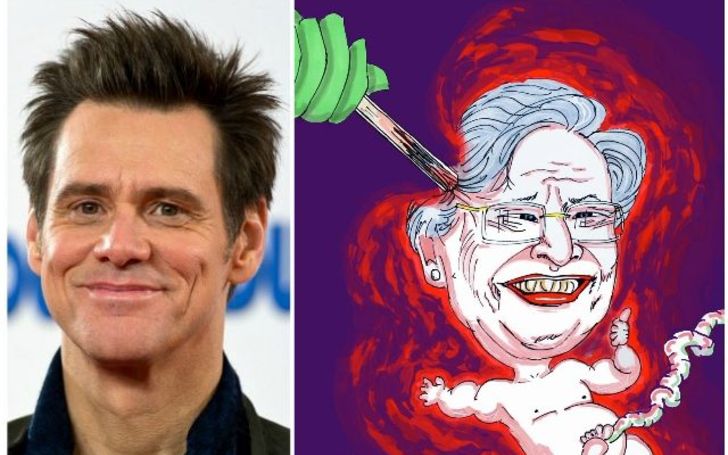 On Saturday, 18 May 2019, the Dumb and Dumber actor Jim Carrey took to Twitter to send a message about abortion with a graphic artwork that showed the Alabama Governor Kay Ivey's caricature fetus being sucked out by a tube.

Carrey insisted the aborters terminate a pregnancy way before it turns into a fetus.

I think if you're going to terminate a pregnancy, it should be done sometime before the fetus becomes Governor of Alabama.

Does Carrey mean to say people like Kay should be terminated way before they turn into a fetus?

I think If you’re going to terminate a pregnancy, it should be done sometime before the fetus becomes Governor of Alabama. pic.twitter.com/6QgsY2rMz7

A lot of people have spoken in favor of Jim Carrey while there are a ton who have criticized him as well.

The American conservative political commentator Ben Shapiro spoke in favor of Carrey as he wrote Jim's depiction of abortion is pretty great with clinical accuracy and "wiping out an individual human life."

This is a pretty great depiction of an abortion: clinically accurate, and wiping out an individual human life. https://t.co/Sy58LwDdj1

Another conservative host, Liz Wheeler also took to Twitter to thank Carrey for the truly accurate and horrifying portrayal of abortion. She went on to say that the actor blessed the pro-life movement with his art.

FYI, Pro-Life Movement is the Right to Live Movement or the anti-abortion movement that opposes abortions.

Thank you for the truly accurate (and therefore horrifying) portrayal of abortion... sucking out the brains of a PERSON because that person is inconvenient to you. You blessed the pro life movement with this.

The artwork works as Carrey's response to Kay's decision of restricting abortion throughout Alabama.

This is not the first time when Carrey, who is dating actress Ginger Gonzaga, drew such violent anti-conservative artwork. Previously, on August 22, 2018, he drew the current President of USA, Donald Trump, who once claimed the windmill noise causes cancer, burning, where he termed the photo "Burn The Witch."

Whatever is going on seems like a pretty ugly moment for Alabamians, eh? What do you guys think about the abortion illustration?