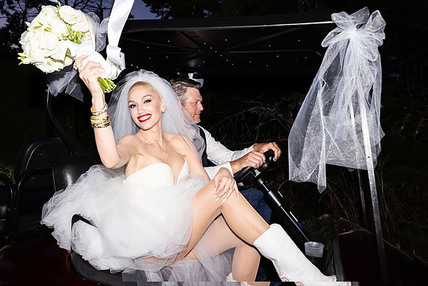 It's Official! Gwen Stefani and Blake Shelton have Confirmed their Wedding: All Details Here!

Headlines reading "Gwen Stefani and Blake Shelton, tied the knots in a private ceremony" had surfaced a few days ago. While the piece of news was still given the benefit of the doubt, considering there was no verification. But now, the musical couple themselves have decided to come forward to confirm the bombshell news.

Stefani, 51, posted several snips from her entrancing wedding. Adorned in a dazzling Vera Wang gown, she captioned the picture "July 3 2021," followed with a heart emoticon. In another post, Stefani wrote, "July 3rd, 2021, dreams do come true." The singer has also made a string of posts on her story.

As per the Today Show, their fairy tale wedding took place at Shelton's Tishomingo, Oklahoma ranch, where he built a chapel intending to marry Gwen someday. The intimate ceremony was attended by 40 guests. Today and Voice host Carson Daly served as the officiant.

Shelton, 45, too made similar posts on his Instagram. The couple had announced their engagement back in October 2020. And since then, they have been teasing their hotly-anticipated wedding. Several weeks ago, Stefani shared her family threw her a surprise bridal shower. "I got kidnapped by my family to celebrate," she said in a selfie video.

The musical couple met and fell in love on The Voice set in 2015.
Photo Source: Yahoo

The couple met and fell in love on The Voice set in 2015, where they were both coaches. They connected over their similar avocation and mainly their high-profiled divorces. After the duo confirmed their relationship, Shelton said, "The relationship literally save my life."

The Country singer revealed that Gwen had trust issues with their relationship at first. He further added, you never know what’s right around the corner that can save your life — that’s literally what happened for me." Both Gwen and Blake were previously married. She is a mother to three sons.