Hailie Mathers Net Worth - How Rich is Eminem's Daughter? 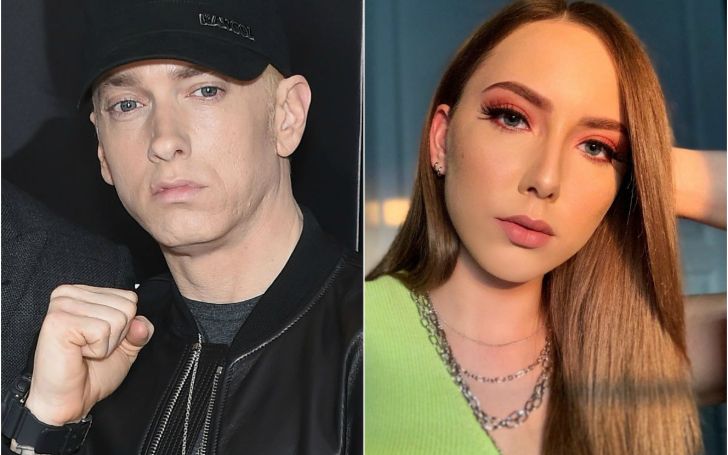 Hailie Jade Scott Mathers might be just one of the celebrity child name for us, but for sensational rapper Eminem, it's the only thing that he adores. Marshall Mathers, aka Eminem, is a proud father who completely loves his daughter Hailie.

A solid proof of that would be the fact that the singer's daughter is his muse for multiple hit songs. Some of them are the ones we sing along like "Hailie's Song," "My Darling," "Beautiful," "My Dad's Gone Crazy,"and "Infinite."

Seems like Eminem really showers his daughter with all the love and care in the world. Fans following the grown-up beauty's Instagram can attest to that. All the lifestyle and comfort's also got us pondering over just how rich Hailie is. So, today we take you to a detailed net worth file of Hailie Mathers.

The biological child of Marshall and his wife, Kimberly Anne Scott, Haile, was born with quite the luck on Christmas, December 25, 1995, in Michigan. She is the only biological daughter of her parents and shares siblings, Alaina Marie Mathers, Whitney Scott Mathers.

Hailie Mathers is the only biological daughter of Eminem.
Photo Source: Standard

Growing up, the child faced constant media limelight due to her father's profession and also with the propaganda of her parents split. Kim and Marshall not only married and divorced once but twice, and later on, they decided to share the custody over their daughter Jade in 2006.

You May Also Like: Ariana Grande's Boyfriend Dalton Gomez - Some Facts to Know About Grande's New Boyfriend

Since then, Haile's held herself with grace and attended Chippewa Valley High School in Michigan and graduated from Michigan State University with a degree in Psychology. Considering her popularity, it's only rising higher as she is a holder of 1.9 million followers on Instagram. You can follow her at @hailiejade. She also enjoys her time with dad approved boyfriend, Evan McClintock. The couple surged dating rumors since their college days.

Jade is nothing like your typical celebrity child. Even with all the riches at hand, she likes to do things herself and take the lever of her life on her own terms. Also given that, Hailie is an Instagram influencer, she collaborated with a famous fashion app so that fans could find elements of her fashion attire in the app.

The American teenager's actual net worth is a whopping $1 million until 2020. Mathers likes to be very private about her life given that, the girl's seen her share of limelight all the way since her childhood. As for the gorgeous lady's future, we can estimate its probably not in the footsteps of dad, Eminem. Perhaps in the line of psychology as she is a degree holder in that.

Also See:Who is Nikita Dragun Ex-boyfriend? Find Out What Happened Between the Former Couple

As for her father, the rap god himself, Eminem is a proud holder of a whopping $210 million accumulated through his notable career as an artist. His career soared heights through his commercial albums, music videos and not to miss the recent upsurge acting career started by the movie, '8 Mile.'

Hope you enjoyed the article. Don't forget to subscribe to Glamour Fame.