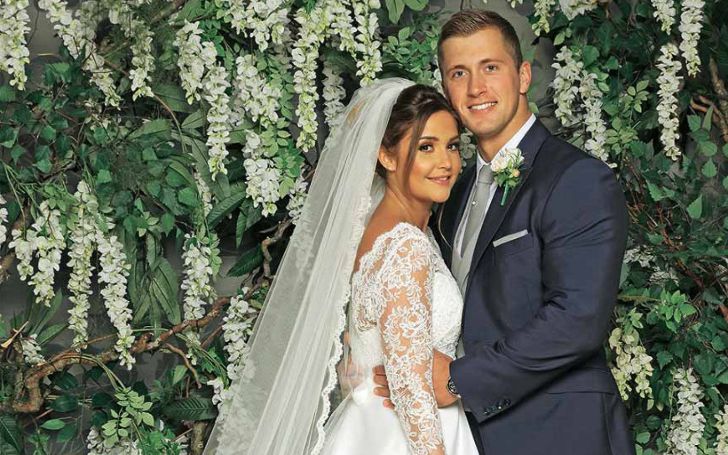 Learn about Jacqueline Jossa's married life? Here are the details.

Jacqueline Mary Osborne is an actress and TV presenter. She is widely known for playing Lauren Branning's role in the BBC soap opera EastEnders from 2010 to 2018.

On October 29, 1992, she was born to Selina Jossa and John Jossa in London Borough of Bexley, United Kingdom. She is famous as an actress, and the same goes for her love life with her husband, Dan Osborne.

Jacqueline Jossa and Dan Osborne light up to enjoy an unexpected date night out in Manchester. The duo, who became one in 2015, rarely gets any alone time due to hectic schedules and being parents to three: Ella, Teddy, and Mia.

However, all keeping aside, they finally got the quality time to spend some child-free time together as they forwarded to Instagram-favourite restaurant Menagerie. They fully dressed up by turning heads in an on-trend neon green blazer; Jacqueline looked every inch the attractive mum.

The former EastEnders favorite teamed skinny jeans with black knee-high boots and gold jewelry, holding a designer handbag in one hand and her husband's hand in the other. Meanwhile, Dan, 30, kept things relaxed and casual in khaki trousers and braved the chilly weather in a short-sleeved white t-shirt.

The pair are in Manchester as the former Towie star prepares for his Boxster clash with former Love Islander Jamie Jewitt. Wife Jac took to Instagram earlier in the day to promote the event, saying she obviously 'can't wait to see her husband in action for a 'brilliant night of boxing' after he's 'trained hard'' for all of this.

Jacqueline Jossa is happily married to TV personality Dan Osborne. Jacqueline Jossa walked down the aisle with Dan Osborne in a lavish wedding ceremony at Delamere Manor, Cheshire, in 2017. The pair have now been all together for four years as they recently celebrated their fourth marriage anniversary with a low-profile family meal together with their children on June 24, 2021.

Jacqueline Jossa insists her marriage to Dan Osborne is 'stronger than ever' after a brief split.
Photo Source: Daily Mail

Jacqueline took the happy occasion to her Instagram account, sharing a sweet snap of them with their children, Ella, Mia, and Teddy from Dan's former relationship, all smiling up at the camera. At the same time, they sat around the table laden with food. The actress captioned the post: "Happy anniversary @danosborne." She also posted a sweet selfie with Dan, as they looked loved up together.

The pair first sparked their romance after meeting at an awards ceremony, while Dan's ex Megan Tomlin was still pregnant with his son Teddy. They took off well together in their relationship, which ultimately led them to welcome their first child named Ella together in February 2015.

In June 2015, Dan proposed to Jacqueline on a romantic getaway to Greece and later tied the knot two years later at Cheshire Manor House with many of her EastEnders co-stars in attendance. However, the pair briefly split during mid-2018, just a month before welcoming their second child Mia together.

They looked back on their relationship while on a brief marriage break. Dan admitted in July 2020 that he'd "made mistakes," but said he and Jacqueline were looking ahead to a "clean, fresh start together." Since then, they've seemed to be happier than ever.