The reasons behind why Jana Kramer didn't want to divorce her sex addict husband Mike Caussin.

American singer and actress Jana Kramer's on and off relationship with her footballer husband Mike Caussin to say the least was not easy at all. The couple separated in summer 2016 after Jana found out about Mike's infidelity. The pair, however, never got divorced and later renewed their vows at the end of 2017.

Well, why? Because Kramer didn't want to give up on her love and feelings for her partner and also because she 'really liked him'. Yup, the 35 years old singer wants to work out on her love until forever. 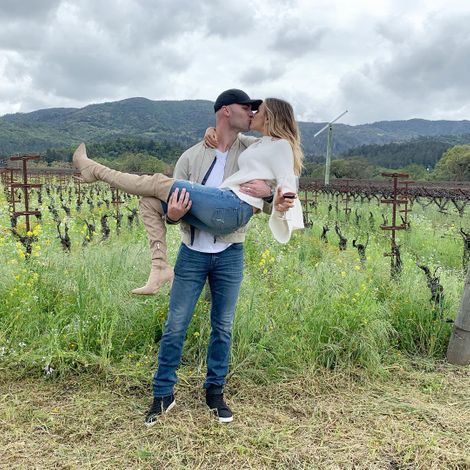 On Monday, during their recent 'Whine Down' podcast episode, the One Tree Hill alum got real with her fans and did a little oversharing about her relationship's ups and downs with her husband Caussin.

Although the fans only knew about Mike's infidelity after the two tied their knot, the 'I Got The Boy' singer reveals that it was a long way before. Mike messed up from the very beginning of their relationship whilst the two were still dating.

Well, Kramer was really into him, so it kind of makes sense she would stick up to their relationship.

Also see: Why Did Jana Duggar Keep Her Courtships Secret?

Following their marriage in May 2015, she admitted that working out on their relationship issues were difficult for them both, especially after she found out about Mike's betrayal, but bringing up divorce into their already failed marriage? The divorce was never the option.

At the end of the crazy week, I’m feeling extra blessed for my family. Anyone else ready for the weekend?!?! ALSO...Jace for the win with that smolder stare. Haha. 📸 @ericamontgomeryphotography

In her words, the mother of two, Jolie Rae Caussin, 3, and Jace Joseph Caussin, 4 months, continued speaking: "It's so easy to get divorced nowadays. It's so easy. So it's, like, you have to work at it. It's hard. It sucks. Some days, it literally sucks."

Jana continued: "I would say that in the times of chaos is when I love him the most because it's like, 'Ok, we're here, doing this together"

The father of her kids wanted to work out on their relationship as well and thus vowed to stand by her till their last breath.

As Mike said: "We both are empathetic to how hard it is. So when it gets hard, we both want to help each other and pick each other up and reassure one another, like, 'Hey, we're doing this. Our kids are healthy, our kids are alive, we're providing for them."

This past week has been so amazing but I need to do a post for this man here. On Monday he shared his story and his truth about addiction on the podcast which he didn’t have to do by any means but did because he wants to help others. I just want to take a minute to say how proud of him that I am. Addiction is a very hard thing for both those going through it and those affected by it but I am so proud of his strength and willingness to be a better man for not only his family but for himself. And I truly can’t wait to see all the people he is going to help on his journey through sobriety. Recovery should be celebrated. Happy one year my love. We got your back and are here for you. 📸 @ericamontgomeryphotography

Kramer, in a recent interview also revealed that the songstress only found out that Caussin cheated on her right before she had to go on a stage to perform. And that her guitar player had to check on her that she was okay. But, the strong lady did 'pull it together' at the end whilst noting that it was hard for her to do so.

Caussin suffered from sex addiction after Kramer found out about his infidelity multiple times. The former Buffalo Bills star, however, admitted there was no sexual relationship outside the marriage. And since they wanted to fight for their marriage, the athlete went to rehab for recovery and is one year sober today.

In other news: Are JoJo Fletcher And Longtime Fiance Jordan Rodgers Finally Getting Married?

Only last month, Kramer released a new song titled '"Beautiful Lies' which details about her relationship with Caussin and his infidelity.