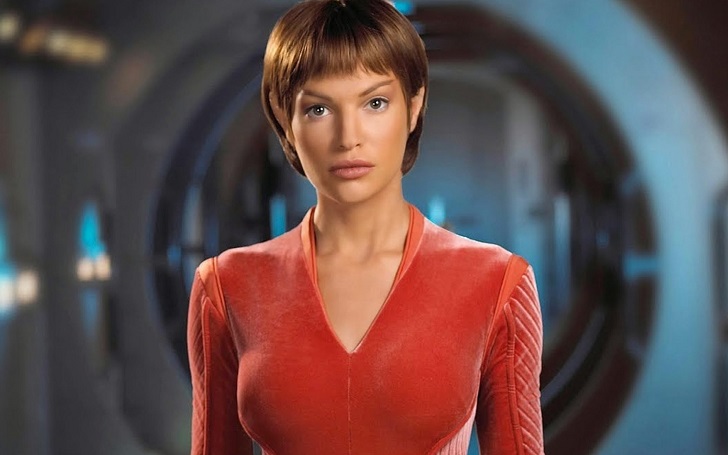 There's been a lot of discussions about  'Star Trek' star, Jolene Blalock, having undergone several plastic surgery operations to better her body. 'Unnatural', many people say.

Whether or not she's gone through plastic surgeries, she's got a fairly successful acting career. She started acting since the late '90s and got her big break when she was cast as 'Cmdr. T'Pol' on the 'Star Trek: Enterprise' series.

While the 'Star Trek' days were somewhat a big success for the enterprise and Blalock, there were significant changes in her body since before and after the show. Then, people started to talk about it.

In a discussion page of Gossip Rocks, a user noted how puffed up her lips looked on the show that she acted from 2001 to 2005. "Jolene Blalock's lips are increasingly distracting, they remind me of two sausages planted on her lips."

Many were not big fans of her lips.
Source: Pinterest

The user also added that she had more surgeries at the time, nose & breast augmentation. The comments of the thread had horrible reviews for Blalock's appearance.

Another user on Reddit discussed how put-off he was by "Jolene Blalock's puffy lips", while also voicing his opinion that she should have never been cast on the show. "She looked too much like a 21st century Hollywood plastic surgery victim"

This will blow your mind: Mary Magdalene underwent Plastic Surgery many times because she was tired of her previous body. See her shocking transformation.

There were both sides of the argument on that though. Some slammed the post being crazy, some just commented on her acting that she did quite good, while one was ambiguous about it.

Some Suspect She Was Chosen to "Sex 'Star Trek' Up"

There were comparisons of the actress with the ones that played the character before and after her. One particular netizen didn't like how she was highlighted on the show to attract more viewers.

Makeup can do a lot to a person's body, one contested.
Source: Star Trek: Enterprise, Paramount Pictures

"She eventually grew into T'Pol, but initially she was terrible. Her idea of playing Vulcan was NOT BLINKING and sticking out her boobs a lot. I think the Seven of Nine comparisons are unfair-Seven was much better written and Jeri Ryan is actually a very good actress."

The Reddit user also mentioned, "T'Pol is being sold as the 'hot chick!' "

While expressing their distaste of her changed looks, people speculated what she might've done to achieve that body. As mentioned earlier, one speculated she went under the knife for lips, nose job and breast augmentation even before her star role.

The 44-year-old doesn't ever talk about any surgery she's had, if she's ever even had one. But a certain individual has estimated she used fat grafts or fillers like Restylane and Juvederm on her lips, Botox around her eyes to give them a lift and in the horizontal lines in her forehead.

According to critics, the rumors are true that she went to Europe for her chest surgery. What actually is true, would be confirmed only when she becomes completely honest about it.

Stay tuned and connected to GlamourFame for more Entertainment and Plastic Surgery-related content. Many of them will surprise you.