Yesterday, Justin Bieber shared one of Diddy's post featuring a touching tribute to his late ex Kim Porter as a promotional post for his clothing line Drew House.

Bieber shared the post because the outfit rapper wore in the picture surprisingly resembled outfit from his clothing line.

Immediately, after the post, followers were quick to respond against the singer deeming the post mourning ex-girlfriend to be inappropriate and disrespectful.

One follower suggested the pop singer “delete this sir, he shared this picture in memory of his wife not for promo for the clothing line", while another called him “disrespectful”.

Following the backlash, the Baby singer set the record straight by responding to a comment where he stated he respects Diddy's family and was unaware the picture was him mourning his ex-girlfriend while the singer posted the picture as the rapper was sporting the identical outfit of his clothing line. 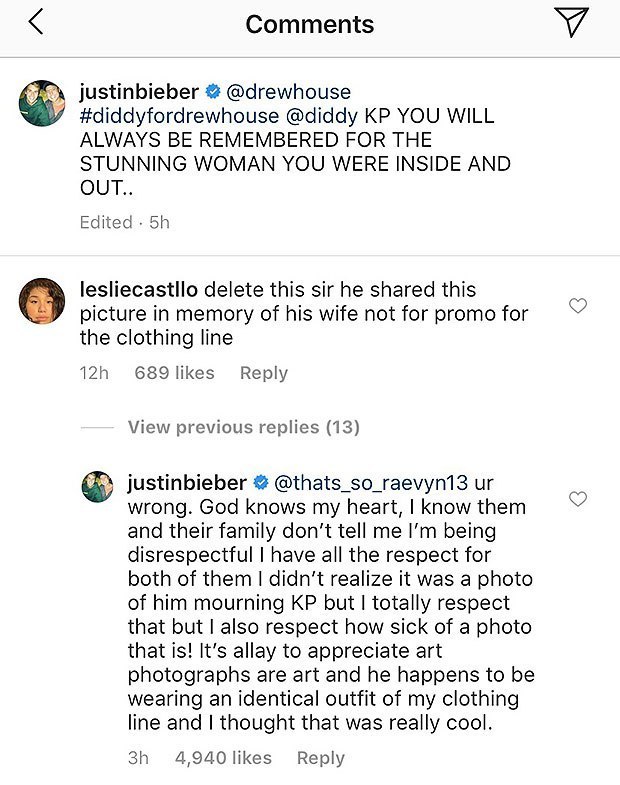 The singer wrote: “ur wrong. God knows my heart. I know them and their family don’t tell me I’m being disrespectful I have all the respect for both of them I didn’t realize it was a photo of him mourning KP but I totally respect that but I also respect how sick of a photo this is! It’s allay to appreciate art photographs are art and he happens to be wearing an identical outfit of my clothing line and I thought that was really cool.”

Despite the negative outburst from followers, Diddy is yet to respond to Bieber's actions.

Justin has been a part of a controversy over the years. Despite the numerous suggestions from followers, ranging from good, bad to dangerous, the singer manages to react and rise up for what he believes in all the time.