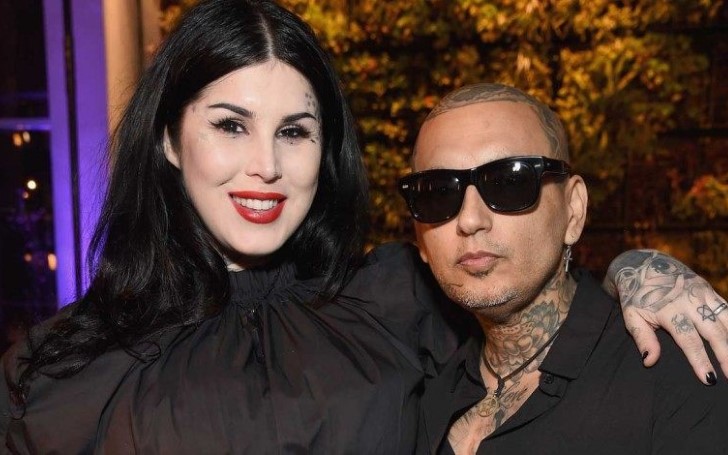 The 36 years old entrepreneur, tattoo & makeup artist, Kat Von D who is also a vegan and thus an animal activist was reportedly pregnant in May and announced the news on the delivery of her baby boy on Sunday via Instagram. Furthermore, in the Instagram picture shared by Kat is a picture of husband Rafael Reyes holding their son.

The couple also thanked their fans through the post for their patience, support, and love for the arrival of their child. As a matter of fact, Kat also revealed that she will now remain inactive on her social media for the next 40 days to focus on their newborn as well as for the transition of the couple's relationship into parenthood.

Meet our beautiful baby boy, Leafar Von D Reyes. Thank you to all our beloved friends+family, fans+followers for your patience in us announcing his long awaited arrival! To be honest, my husband @prayers and I want to take the next 40 days [the 4th trimester] to focus on the baby and our amazing relationship transitioning into amazing parenthood - so, please excuse us if we’re not on here as much for a little while. Just know we love you all and thank you for all the words of love+support! 🖤

The couple gave birth to a son and apparently named him already too. The name of their son which is very unique and beautiful is Leafer Von D Reyes. It's appealing how the couple took both of their last names to name him.

You may also like: Julia Roberts Makes "Homecoming" Best Streaming Series of The Year

whats above love? My Wife and my son are. 🖤🖤🖤 It might not look like it on the outside but on the inside I’m the happiest I’ve ever been in my life! This year has given me so much to be happy and grateful for. I love you so much kitty I’ve never seen anyone fight for anything the way you fought to bring our son into this world. Magick is real and so is my love for you @thekatvond 🖤🖤🖤

''It might not look like it on the outside but on the inside I'm thee happiest I've ever been in my life!''

The couple only got married in February after dating for a short period of time. The couple had known each other for years though.

My fave cookbook now has a volume 2! Highly recommend both of these @smithanddaughters cookbooks even if you aren’t vegan - they’re that good! ❤️🗡

Many sources revealed that the vegan artist is also raising her newborn son and her entire family on a strict vegan diet. Reports state that there is no harm to the mother and son with their vegan diet.

Congratulation to the new parents!