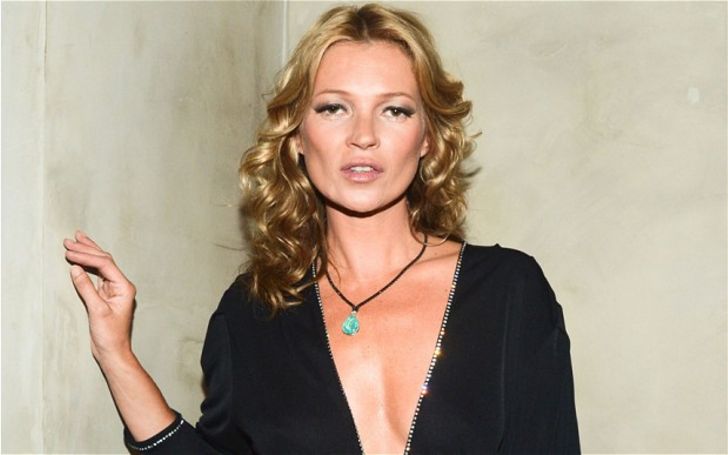 Kate Moss throbbed the heart of millions with her supermodel figure in a black bikini.

Supermodel Kate Moss is living the best day of her life as she was spotted having a chill vacation with her long-time best pal Sadie Frost and Sadie's daughter, Iris Law in Portofino.

Kate, who is the sister of saucy Lottie Moss, looked dead drop gorgeous as she dived into the sea from her luxury yacht with her bestie.

Moss showed off her svelte frame in a strapless black two-piece which knotted at the front displaying her cleavage as she relaxed on a deck. Moreover, the model rocked her sporty looks with branded black sunglasses.

Sadie who recently dealt with her ex husband, Jude Law's wedding, also looked no less than Kate in her patterned kaftan over her swimsuit for her outing.

While Frost was enjoying her time, her daughter, Iris also was having a chill pill with her beau Jyrrel Roberts, 21. What's more, the love birds were even spotted, sharing a passionate kiss on the top of the deck.

Kate and Sadie who have been best buddies for years now; were known as members of the Primrose Hill set, a group of stars a reputation for 'drink, drugs and bed-hopping'.

However, those days are long gone when Kate was known for her party-girl days as she's more concerned with looking after herself these days.

A source disclosed to The Sun in an interview,

Kate is like a new woman and a much better version of herself. She is focused, professional, and glowing with health. Everyone is amazed at how well she has done in not drinking for a whole year, considering what she used to be like. But she has found it easier as time has gone on.

Meanwhile, Moss also gushed about her new life style in a statement saying, "I’ve learned to take care of myself a bit more. I do yoga every day. I don’t go out nearly as much. And I take care of my skin, which somehow has held up."