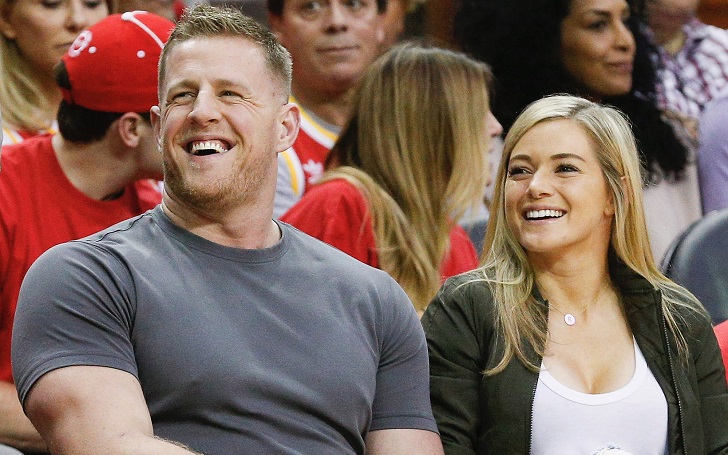 Kealia Mae Ohai has multiple connections with football. But she's swerved from the regular pattern to enjoy a different kind of football. She is a professional soccer (or football to the rest of the world) player who played for the national U-20 team in the World Cup.

J.J. (Justin James) Watt, on the other hand, has a successful American Football career with the Houston Texans since being drafted by the team in 2011. Almost a year before confirming their relationship in 2017, they started dating on the down-low. They've now moved forward with their relationship with an engagement event back in May.

Watch: Get to Know Kealia Ohai a Little Better

They have two dogs together and enjoying the best times of their lives.

The 27-year-old currently plays Attacking Midfielder for the Houston Dash, and considering their proximity to one another, she was bound to meet Watt one day. Her passion was dead set on soccer from a very young age. She is a member of the US youth national programs since 13 and played for the national team in the under-15, under-17, under-18, under-20, and under-23 games.

She was part of the Championship winning team for Tar Heels in 2012.
Source: North Carolina Tar Heels

All her four high school years, she led the team to state soccer championships. Following a successful stint at North Carolina Tar Heels in college, she was selected as the second overall pick in the 2014 NWSL College Draft by Dash. She's been playing for them as their main forward ever since.

The biggest success story for Ohai was the 2012 FIFA U-20 Women's World Cup when she led the national U-20 team to victory. She scored many crucial goals in the tournament, including the winning goal against Germany in the final, the only goal they conceded in the entire tournament.

Watch: 1:27 - Kealia's Shot Against Germany That Won USA the Title

The senior-team international debut came in 2016 when the US faced Switzerland in an international friendly, and she scored 44 seconds into the game as a substitute. She was called up to the national team's training camp in July 2018 but didn't make the final cut.

Football has been in her sight with her sister, Megan Ohai, also enjoying some success with the USC women's soccer squad. Megan is married to Brian Cushing, who is the Assistant Strength and Conditioning coach for Houston Texans.

Brian also played the game before he hung up his helmet in 2017. It means he played together with Wyatt for around six years. It was through him that the couple under discussion met

The first indication of their relationship came in early 2016 with Watt's appearances in Ohai's games with the Dash and a moment that he sported a #7 Dash jersey, Ohai's number, during a press conference.

That '7' said something even if that was a Dillon Panthers shirt.
Source: Greg Bailey

The pair were really already dating but waited a year for coming out to the public about it. Watt confirmed their dating endeavors when he came as a guest on the 2 Up Front podcast in January 2017 and shared pictured from their vacation in Mexico.

Fast forward two more years, the couple is engaged as fiancé-fiancée since May 2019. Watt proposed Ohai in the most romantic of ways, during a dinner with the most amazing of views. He shared the snaps of the moment via social media. He had it all planned out perfectly.

The wedding is yet to be announced, but judging by the history of NFL players' relationships, it is not too far away to call them husband-wife.