home Lifestyle Leona Lewis Tied The Knot With Dennis Jauch In A Lavish Ceremony Held At Sting And Trudie Styler’s Estate In Italy; Check Out Her Stunning Wedding Dress!

Leona Lewis Tied The Knot With Dennis Jauch In A Lavish Ceremony Held At Sting And Trudie Styler’s Estate In Italy; Check Out Her Stunning Wedding Dress! 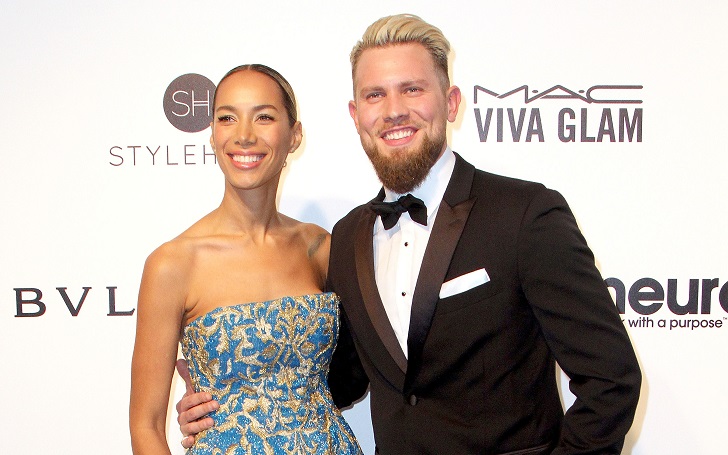 Congratulations are in order for Leona Lewis who got married to boyfriend, Dennis Jauch. They chose a Buddhist chapel in the grounds of Sting and Trudie's home. Check out her pictures in her beautiful wedding dress.

Singer Leona Lewis and her long-time boyfriend Dennis Jauch got married in a tearful yet romantic ceremony in Italy on July 27. They chose Sting and Trudie Styler's ravishing 16th-century Tuscan home, Il Palagio for their big day.

The wedding was lavish, to say the least. The location itself was mesmerizing, and Sting's 865-acre estate contained everything a person can realistically dream of, with an outdoor pool and even a giant chessboard! The 'Amber Hall' actress walked down the aisle to Ave Maria in the Buddhist Chapel, as she was watched by 180 family members and friends. They were forced to do the ceremony inside when it was supposed to be outside, due to an electrical storm. But Leona claims it was better since being inside brought everyone even closer.

On the selection of the site, the 'Bleeding Love' singer told HELLO!,

It was so beautiful. We wanted to marry somewhere that felt like home, and that’s how this place feels.

The chapel held "so much good energy" for the pair, and it seems like they had a really spiritual wedding. Well, the wedding cake was vegan! And it was made of natural and no artificial flavors. Nonetheless, they wasted no chance of making it grand. They hired a Sicilian dessert stylist and pastry chef Marco Failla to make the traditional 'millefeuille'. And they got involved in the baking process as well.

The couple held their wedding reception in Sting's recording studio, and Leona wore a beaded blush dress for it. Sting's grand piano was used at the eve as well.

The guests included Sugababes singer Keisha Buchanan and 'The Voice' winner Jermain Jackman who sang for the ceremony. Leona had invited 'X Factor' judge Simon Cowell as well, but he couldn't make it since he was busy with 'Britain’s Got Talent'.

The dress was designed by Israeli designer Mira Zwillinger, and it featured a semi-sheer bodice with spaghetti straps and a soft tulle skirt. The gown is the New Fiona design from Mira's AW19 collection that features a low back with a silk organza bow sash tied around the waist. Although, Leona removed the bow for her matrimony in Tuscany and made it her own.

The Former X Factor winner change into a blush pink adorned tulle gown for dinner and a crystal-embellished jumpsuit for the evening party that went on until 7 am.

Leona met the German-born choreographer and creative director Dennis in 2010. Back then, he was a backing dancer on her 'The Labyrinth' tour. He proposed to her on their eighth anniversary last year. Dennis is also a hip-hop world champion who won 'So You Think You Can Dance?', German edition.

Leona expressed her emotions in the HELLO! interview,

It was just the most beautiful day, full of love. It was so special to be able to bring together everyone we love. There were a lot of tears.

It sure must have been romantic, and the love that began nine years ago still lives. Everyone is super happy that they finally tied the knot.