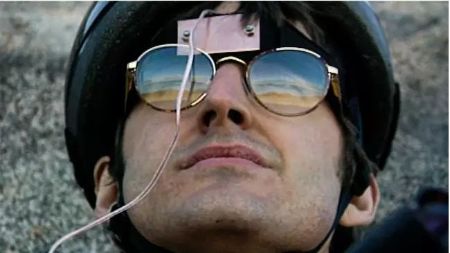 On the ongoing resurgence to intrigue the mysterious US military base, Louis Theroux claims that he was doing all of this 'before it was cool.'

Louis Sebastian Theroux, the person who claims he has been to the most confidential, restricted and surveillance 'Area 51' reminded everyone he has not been doing it for the first time.

The documentary, filmmaker, and broadcaster Louis recently posted a throwback picture taking to his Twitter claiming he traveled to Nevada, the home of the not-so-secret base back in 1997.

For those who are wondering why people were so hyped with the reserved area, and it's a subject of controversy, we got you covered.

Is Donald Trump A Time Traveller? A Person Claims To Have Found All The Proof! >>>

Area 51 is the common name of a highly classified the United States Air Force (USAF) facility located within the Nevada Test and Training Range.

The intense privacy covering the base has made it an intriguing factor and the frequent subject of conspiracy theories with assumptions as a central component to unidentified flying object (UFO).

That's a reference to an episode of season one of Louis Theroux's 'Weird Weekends' where Theroux investigated the phenomenon of UFOs and aliens.

Besides, he even threw a rock into the area where the police politely asked Theroux to stop doing so.

But as there is a recent petition going on for the Area 51 in a bid to uncover alien activity, the US Air Force officials warned this time it might end with something hazardous.

"I do understand it was started as a joke by someone, but there are a number of people who are actually planning on showing up. This is a misguided idea. Area 51 is a classified research base. There are no aliens or alien technology located there," shares Laura.

He continued: "The only place there was ever any alien technology was at Site S4, south of Area 51 proper. That was 30 years ago. S4 may have moved decades ago, or it may be no longer being used for the project. I do not support this 'movement.'

"The last time someone tried to get into Area 51, he was shot. This is not the way to go about trying to get more information."

So, do you guys want to invade the highly restricted military area? Well, it's definitely not recommended following the warning from the higher authorities states, however, that makes it more exciting and mystifying.