home Entertainment Matty Healy Girlfriend - Is 'The 1975' Frontman Dating Someone?

Matty Healy Girlfriend - Is 'The 1975' Frontman Dating Someone? 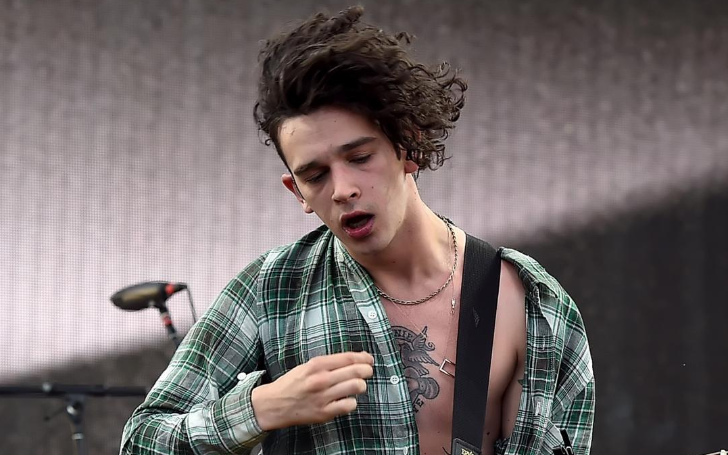 Matthew Healy, aka Matty Healy, is the frontman of the English indie rock band, 'The 1975.' The rock singer and his band are based in Manchester, while the singer originally hails from London. Matty was born on April 8, 1989, and raised in London by his parents Tim Healy and Denise Welch. The lead vocalist of the band also has a brother named Louis.

While talking about his career, the singer had a very humble beginning. Matty formed his band with his friends-cum-band members Ross MacDonald, Adam Hann, and George Daniel. The group first established in 2002 and started by playing cover songs. It was only in the latter year; the band began to write their own songs.

Matty and his band, as of today, holds a great place in the music industry; more precisely, they are pretty popular on their genre, which is indie rock. While it is no secret, the band and its members are pretty popular and doing great in their careers; we wanted to know more about its frontman.

While talking about Matty, we know how great a singer and a band member he is, we just wanted to know if there's someone Healy gave his heart to. We will cover about his love life as we try to figure out if Matty Healy is single or is in a relationship with his girlfriend.

Is Matty Healy is Single, or Dating Someone?

Matthew Healy, aka Matty Healy, is a heartthrob of many, while it's easy for us to assume he is certainly dating someone, the answer to this is somewhat shocking. The 30-year-old English singer, Matty Healy, is still single, but that was not the case a while ago.

Matty Healy is currently single after he got dumped by his ex-girlfriend, Gabriella Brooks.
Photo Source: Pop&Rock

The frontman of 'The 1975' was dating his former girlfriend, Gabriella Brooks. The former couple was together there for a long time; their breakup not only shocked us, fans, but Matty Healy as well. There's a good reason former couple called it quit, so let's just find out what happened between them.

Why Did Matty Healy and Gabriella Brooks break up?

According to the reports, Gabriella Brooks is the one who took a step to part their ways. Gabby dumped her longtime boyfriend, Matty Healy, because of his excessive partying habits. The former couple who started dating from 2015, called it quit in 2019. While she was the one who abandoned Matty, but it was not easy for her.

The report suggests Gabriella, who is pretty popular as a model, leaned on her best friend Anais Gallagher, who is the daughter Noel Gallagher who is a well-known English singer of the band Oasis. It seems it was pretty hard for the model to break the relationship of four years, but it seems she moved on.

Gabriella Brooks dumped Matty because she was tired of his excessive partying. After moving on, she is dating Liam Hemsworth.
Photo Source: Instagram Archive

Recently, rumors are suggesting former girlfriend of Matty Healy, Gabriella Brooks, is dating Liam Hemsworth. Well, we recommend not even calling this a rumor anymore, as the couple is going public about their relationship. Well, it seems like her breakup with Matty turned out good.

While Matty, on the other hand, is still struggling with his drug habits. He is still busy with his tours and band things but has not found the girl as good as Gabriella. But it's all about time, and we guess he is taking his steps carefully now.

You May Also Like: Cole Sprouse Lili Reinhart Breakup - are the Claims Cole Cheated Lili True?

According to some fresh reports, The 1975 frontman is dating some after his split with Gabriella Brooks. Matty Healy recently went public about his relationship with FKA Twigs. Just like Healy, Tahliah Debrett Barnett, aka FKA Twigs, is also a singer-songwriter.

Matty Healy is dating his girlfriend, FKA Twigs. FKA is also a singer/songwriter. The couple started is believed to be dating from January of 2020.
Photo Source: Truman Black Instagram

The rumors of them dating started in January of 2020 when the couple was spotted on Christmas Eve, and Rupaul's DragCon UK. The couple are went public on their social media on February. The pair was seen getting all cozy; Twigs seemed perched on his lap and while Healy seemed to like it.