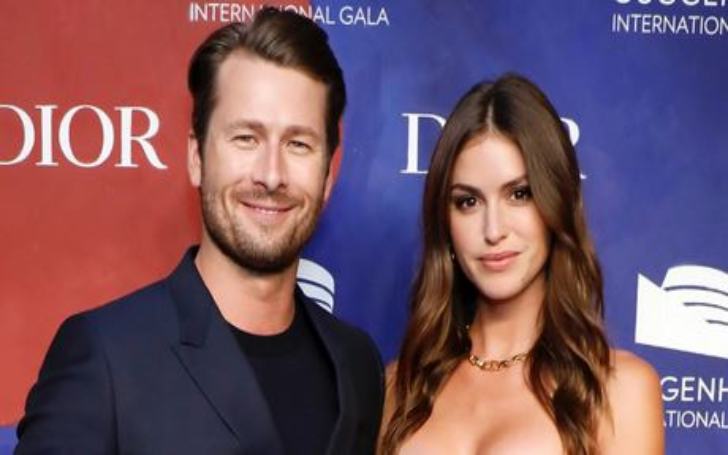 Did you watch the latest Top Gun: Maverick movie? If you have viewed that film, this next personality is no stranger to you. His name is Glen Powell; he is popularly known for his role as Lieutenant Jake "Hangman" in that particular film. Texas native Glen has now been part of several blockbuster movies and series.

Since 2003, he has joined the entertainment industry and is giving his best to the business. Some of his acting credits include Hidden Figures, Set It UP, Astronaut John Glenn, The Dark Knight Rises, and so on. Now, let's know more about the actor's personal life and get to know him better.

Award-winning actor Glen Powell is now no more single. Currently, he is dating his beautiful girlfriend, Gigi Paris. The duo started their sweet love journey back in 2020 privately. However, both of them gave a clue to the world through their respective social media account.

They enjoyed a vacation in Mexico that year, and the media went crazy about their unexplained relationship. In February 2021, after a year of dating, they made it public that the pair were dating to the world. Paris uploaded the duo on a dirt bikes picture and captioned it "Here's to you," while the actor wrote, "My Ride or Die, Happy Valentines Day, you all."

Their sweet gesture regarding the relationship made the internet crazy full of beautiful comments and blessings. Further, the happy couple is now enjoying their relationship for more than two years. They seem very much happy with one another and respect one another deeds to the fullest.

Several high-profile celebrities made grand entrances at the 80th Golden Globes Awards and stole the show. This time The Dark Knight Rises star Glen Powell teamed up with his lover, Gigi, and grabbed extra attention.

At Beverly Hilton Hotel in Beverly Hills, the duo wowed the crowd with their stunning pair-up. During the event, the handsome actor dressed in a black tuxedo looked as amazing as always. In comparison, his partner wore a gold gown. She completed the look with her golden necklace, open-toe heels, and a cute little bag.

Both of them glanced beautifully together. After all, they were seen exchanging love during the red carpet-photo shoot. This is not the first time the lovely duo has made a red carpet entrance; they were captured together at Guggenheim International Gala.

American actor Glen's new girlfriend, Gigi Paris, is also attached to the glamour world. She is a model by profession and has done several ramp walks. Currently, she is representing Premier London and Two Management with a great outcome. Wilhelmina Models also sign the model.

From the age of thirteen, she has been involved in this industry after being discovered while visiting her grandmother's home in New York City. In 2016, she paired with Sports Illustrated Swimsuit Casting Call and doubled her fame. She has also done several music videos, including Somewhere In My Car by Keith Urban.

The Miami native, Gigi, is now in her thirties. She celebrates her birth every 14th of June. During her thirtieth birthday, Powell shared a beautiful picture of the pair on his Instagram account, which he captioned. "Wherever you are, the sun shines brighter. Every day is perfect because you're in it," he penned. "Welcome to 30."

Past Relationship and Affairs

Before having an interesting love journey with Gigi, the actor had romantically linked with several women. Glen Powell has faced several ups and downs in the relationship but never spoke about it.

In January 2017, he began dating the beautiful TV actress Nina Dobrev. With an immediate attraction, they began a sweet relationship.

They were spotted taking an intimate picture at Julianne Hough's Idaho wedding. Later they attended several awards shows, including the 75th anniversary of the Golden Globe Awards. However, their sweet relationship didn't last long, and they parted ways. By the November of the same year, the former pair's relationship cooled off.

Many sources have claimed that their hectic work schedule made it harder to witness one another. After the split, Glen is dating his girlfriend, Gigi, while the Vampire Diaries face several breakups. She has dated her co-star Ian Somerhalder, Austin Stowell, and is now romantically liked with Olympic gold medalist, Shaun White.

Texas native actor and producer Glen is one of the successful acting personalities. His appearance has made him a bigger star. With his increment in acting, he has amassed both name and fame. As of 2023, he is enjoying a net worth of $3.5 Million. The talented personality has gathered all of his fortunes through his impressive career as a producer and actor.

As an important cast in every involvement, he earns decent remunerations. Recently he did the voice actor as Dave in Jurassic World Camp Cretaceous. As estimated, he makes over $200,000 per annum through his overall involvement. He lives a happy and luxurious life with his partner, Gigi, in his Los Angeles home.