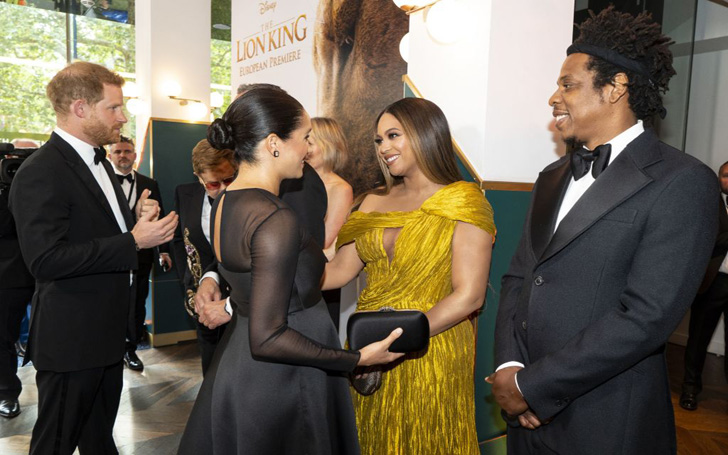 Music royalty and actual royalty met for the first time leading to the ultimate power meeting.

The British royalty met the American music royalty at the premiere of The Lion King. No, we are not making this up, it is a fact, and we have pictures to prove that two of probably the most influential ladies on planet earth were in the same building, talking to each other.

The two figures met at the European premiere of Lion King which was held in London with many high profile guests, but the people that mattered were Meghan Markle and Beyonce.

It was a known fact for a while now that Prince Harry would be attending the premiere, but we didn’t know if Meghan would be accompanying him or not. The Royal correspondents said that Harry was among the guest list, but the involvement of Meghan herself was kept under wraps.

As soon as it was reported that Beyonce would be present at the premiere of The Lion King in London and Prince Harry would be making an appearance at the premiere, people were quick to connect the dots and imagine the meeting between Meghan and Beyonce. This was like a dream come true for most of the fans, but still, Buckingham Palace wouldn’t tell if Meghan would be present at the event or not. Finally, the Palace confirmed the news on Thursday much to the delight of fans.

Though the two have never met each other, it didn’t stop Beyonce from praising her Melanated Monas. During the Brits award, the music royalty and her husband posed in front of the portrait of Meghan Markle like their music video for ‘Apeshit.’ She captioned the photo, “In honor of Black History Month, we bow down to one of our Melanated Monas,” as the couple showed solidarity with the royalty after she faced some misogyny online and in media.

That was not the only praising post that Beyonce had for Meghan as she continued to show her love and support for the royalty, on her website saying, “At the wedding her culture was front and center, and she and Prince Harry have continued to push the race relations dialogue forward both near and far.”

Not only through posts, but the two royalties have also some friends in common as Meghan is friends with Serena Williams and the Duchess even showed up to the Wimbledon to support her friend. Serena has also appeared in the music video of the hit song by Beyonce, ‘Sorry.’

Finally, the two met at the red carpet, and it was beautiful as the two hugged, and Beyonce held her, and the two talked for a while and then Harry joined in talking about how busy Beyonce and Jay-Z are. Just look at the video below, and no, you are not dreaming.

If that wasn’t enough to melt your heart, just read the lips of Beyonce, and you will see that she called Meghan, “my princess.”

Just look at some of those pictures of the two beauties looking at each other, and you can see the love and respect the two have for each other. The only people missing from these photos are Ellen and Oprah, and the whole thing would have been the most fabulous collection of powerful women of our modern time.

The way the four of them interacted with each other, it seems they have become lifelong friends as this meeting. The fans will agree that they all need more of this in these chaotic times that we are living in.