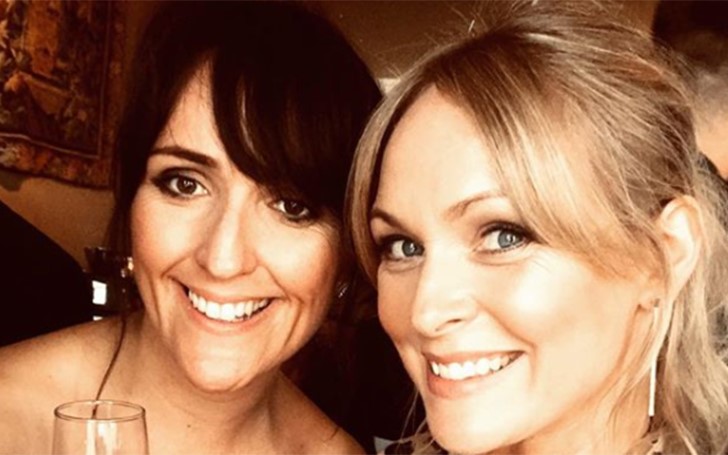 Our favorite LGBT artist Michelle Hardwick got engaged to girlfriend Kate Brooks and we are here to celebrate to that.

Emmerdale Actress Michelle Hardwick has recently just announced her engagement to producer girlfriend Kate Brooks. The actress posted the exciting happy news of getting engaged  to her fans through her Instagram account on Wednesday.

The 42 years old actress looks super happy in the black and white picture with now-fiancee Kate. The pair can be seen holding a glass of wine with a huge smile on their faces.

So after months of planning, I popped the question!!! She said yes!!! 💍👰🏼👰🏻 #loveislove #noordinaryproposal

See Also: Best and Worst Dressed Stars At The 2018 MAMA

Through the cute shared photo's caption, it is revealed and clear that Michelle was the one who proposed to Kate. She said:

"So after months of planning, I popped the question!!! She said yes!!! 💍👰🏼👰🏻 #loveislove#noordinaryproposal"

However, this is not the first time Michelle has posted pictures with Kate on her social media. She is really great at showing off her girlfriend on her Instagram. She regularly shares the adventures and the usual outdoor activities she has with Kate.

As a matter of fact, the two have been receiving lots of good wishes too. One of her fans on the comment section shared:

"Fantastic news so pleased for you both 👰 happy wedding planning xx"

The duo met each other when Kate was a producer on the ITV soap. They announced their relationship only in September when they were on their holiday in San Francisco and has been together for two months since then.

Poor little Fred has a cold. Lots of cuddles from his mummies today 💜 #cavapoosofinstagram

A post shared by Michelle Hardwick (@missmichellehardwick) on Nov 4, 2018 at 2:48am PST

Michelle was previously married to Rosie Nicholl for two years. The former pair divorced in 2017. The actress revealed in an interview that it was a mutual decision to split. And the ex-couple still shares their dog together.

Meanwhile, Michelle is also popular in the LGBT community. Many of her fans consider her as their hero for helping them to come out of the closet to their family and friends.