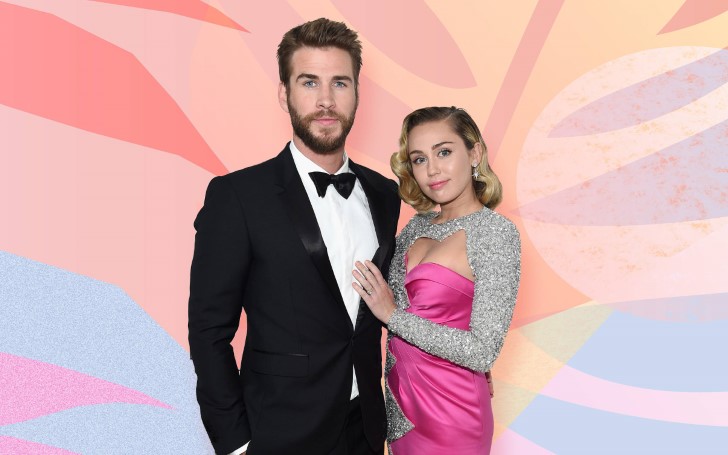 Recently on December 23, 2018, the couple secretly married and nurtured their 10-years of up and down relationship into a successful love story.

The wedding was held in their lavish mansion on Miley's hometown Tennesse. The marriage was kept in a low profile as it was toned down from media and any other public mediums.

The couple revealed their marriage only after two days, posting a series of photos from their wedding on Instagram.

Miley was wearing an off-shoulder gown whereas Liam was wearing a black suit with a matching white shirt. Both the couple looked fabulous together. Later, Liam posted a photo from Instagram unraveling Miley's face and quoting "My Love".

The couple fell in love back in the year 2010 during the movie The Last Song where Miley and Liam starred together. However, the pair split in the same year before eventually reconciling the following year. Later, on June 12, 2011, the on and off lovebirds got engaged.

After 8 years of engagement, they finally tied the knot in 2018. This lovely duo seem happily married, in fact, they recently went to honeymoon on Montana snow.

Recently in an interview, Miley's husband Liam was asked about their marriage life

Interviewer: "Did she take your name?"

Liam Hemsworth: Yes, she did. She will still be obviously known as Miley Cyrus but still, she took my name as it is one of the best things about her. I didn't ask her to take my name and she's like of course, I am taking your name.

Interviewer: "You kept the marriage very quiet, why was it? "

Liam Hemsworth:"Yea, we never wantd to do anything to extrvenetae and big. We just wanted something simple and organic just with with basic a mediate family"

A couple of years back, Miley too was interviewed on The Ellen Show where she was asked about her sex life,

Ellen: 'Your sex life with your lover?'

Miley: 'My grandma is in the audience, she can't hear it, it's ok'

You can listen to what Miley said about her sex life in the video down below.

The couple shares a blissful marriage life, albeit Miley is yet to publically reveal much about her married life. As a matter of fact, she refuses to provide details related to her wedding. Thus, it seems like Miley doesn't want to be too explicit about her personal life in the media.