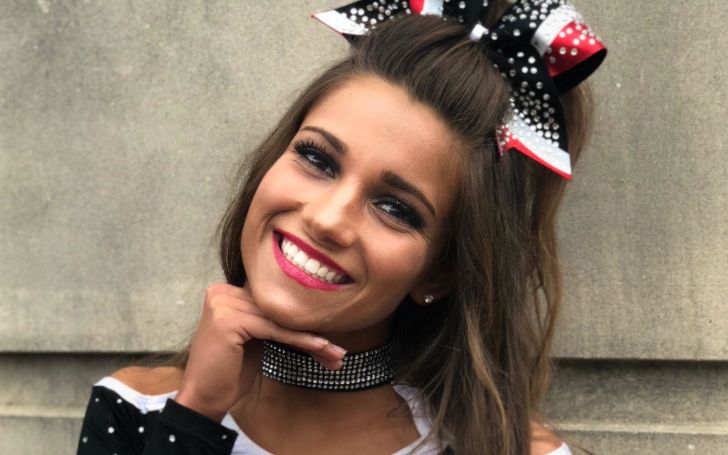 Morgan Simianer is a name famous from the Netflix popular 2020 TV series, 'Cheer'. The series follows the life of competitive cheerleaders at the 'Navarro College' in Corsicana, Texas.

Simianer is featured as the second-year cheerleader who's got a tricky spot in the cheer team. The six-episode docuseries takes viewers into the team's preparation for a competition in Daytona Beach, Florida. The series follows a great deal of hardships and actuality in the athleticism of cheerleading.

Fans wondering about Morgan from the 'Cheer' get ready for insight on some of the interesting facts on the American cheerleader.

The athletic personality is originally from the land of Osage, Wyoming. Though Morgan's family background is a little tricky, to begin with. Just when she was a sophomore in high school, her parents got divorced.

Morgan spend her time in a trailer after Sophomore year due to family issues.
Photo Source: MTV

The tricky divorce forced the girl to live in a trailer with her brother. The situation was made so because her mother left abruptly, and her father lived off separately with his new wife and children.

You May Also Like: Ellana Bryan - Some Interesting Facts About the Plus Size Model

After years of living in the trailer, the Simianer kids were finally rescued by their grandparents. The change of town gave Morgan the opportunity to attend the Navarro College in Corsicana.

There's always a second chance at things in life. If you've watched the Netflix series, 'Cheer,' then you must know what we are talking about. The series pictured Morgan soaring to heights unknown all because of her passion, dedication, and support from Head coach Monica Aldama.

In the series, you can see the cheerleader saying, "If Monica believes in me enough to put me in, then I should be able to trust myself," She also emotionally adds, "I'd do anything for that woman."

Ellen DeGeneres invited Morgan and her Navarro Cheer teammates to surprise model Kendall Jenner. Apparently, Jenner, who is a former high school cheerleader, was obsessed with the 'Cheer' series, so Ellen decided to surprise her with the Navarro team.

The Navarro teammates were: James Thomas, Shannon Woolsey, TT Barker, and choreographer/coach Andy Cosferent. The cheerleaders made Kendall perform a stunt demonstration in the show. The team even gifted the supermodel with a cheer uniform.

Morgan's Beauty Regime is to Sleep With Makeup

While that might not sit in well with some of us, it suits perfectly to the likes of this famous cheerleader. Simianer says she likes to sleep in full makeup the night before a performance. The reason for this bizarre habit is her not being a morning person, as she exclusively told the Vogue.

The 23 year old cheer star mentioned usually having a team dinner the night before a performance, so she carefully sleeps on her makeup and just re-curls hair the next day. Even though people tell her it's a disgusting habit, still Morgan claims its because she hates mornings.

Hope you liked the article. For more, be sure to follow Glamour Fame.