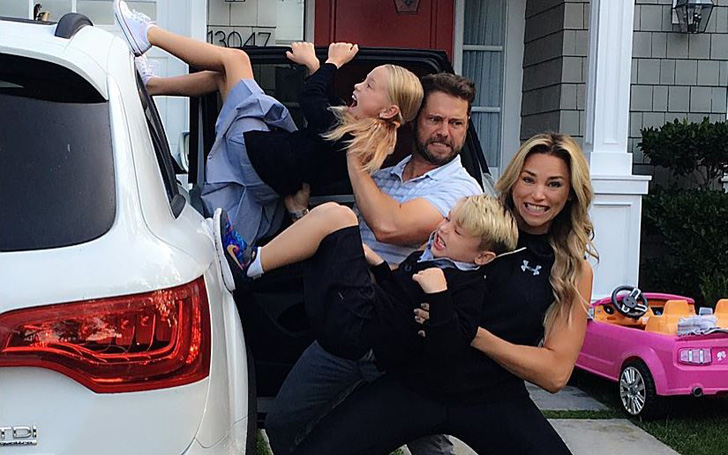 Naomi Lowde-Priestly lived a life, to sum it all down to six words. She moved from England to America, where the makeup artist moved from place to place along with her husband and became a respected person in the makeup field and also later on in her life, became a multiple times nominated and awarded personal trainer.

The fitness entrepreneur was born on 15 September 1976 in England, and she was the second of two kids of her father and mother. Naomi has an older brother who took care of her when she was young and was the supportive figure in her life early on. Most of her early life was spent in England, where she attended St Cuthbert Mayne School located in Devon county and later got her BA in Fine Arts.

Naomi started her career in the makeup industry after she was married and later on worked with Victoria Secret and many other movies and TV shows, including various reputed award shows. So, here are the top 5 facts you should know about makeup artist Naomi Lowde-Priestly.

5. Naomi Lowde-Priestley's Brother Started a Female Rugby Team Just so She Could Play the Game

Naomi grew up in England where she instead of falling in love with soccer or cricket (yeah, yeah, no one likes cricket) the makeup artist was taken by the sport of rugby. But in the town, she lived there was no female rugby team, and you cannot play rugby on your own. So, in order for her to be able to play the game, her elder brother made a whole team for female rugby players.

Also See: Who is Emily Compagno's Husband? Grab Details of Her Married Life!

The fitness trainer said, “My brother started the first girl's rugby team where we lived in England so that I could play. Thanks to him, I went on to play rugby for a few years in my teens—I loved the sport! Unfortunately, I had to give up the sport due to getting braces (on my teeth) at 18 years old, just before heading off to college.”

4. She was Named the Hottest Trainer of 2014 by Racked

Naomi was content with being a makeup artist and moving around with her husband and finding work wherever she went. But then she was looking around in Los Angeles while she was settling in there and all of a sudden she fell in love with the cycling fitness center Sweat Shoppe. She was a frequent visitor of the gym, and soon she became an instructor.

In 2014 she was one of the numerous women who were pitted against one another in a vote-off, and the mother of two took the prize of the Hottest Trainer of 2014 by Racked.

3. Naomi became a Makeup Artist to both be with Her Husband and Work

The beauty of England was moving all over America because her husband is an actor, and he needed to keep moving for his job. Naomi wanted to be with her husband and also work, so she dusted her old makeup talents and joined The School of Makeup Art and completed the course at the top of the class.

Then, slowly, she started to get work while also being with her husband in various parts of America. If she could work in the same project with her husband then fine, otherwise she would independently work with various other productions.

2. Naomi and Her Husband, Jason Priestley’s First Meeting, was Something Out of a Movie Script

Naomi was in London, and so was Jason Priestley, for his work, and while they were in the street, they bumped into one another while waiting for the signal to change in the crosswalk. It was love at first sight for both, and after she finished her college degree, the makeup artist packed her bags and moved to the States with her then-boyfriend, Jason.

It was almost four years later in 2004 when the actor proposed and another year when the couple shared their vows and got married on 14 May 2005. It was a lavish wedding with 120 guests, and some of Jason’s celebrity friends from 90210 showed up.

1. Naomi Laude-Priestley is the Proud Mother of Two Kids

Managing busy work schedules and family life can be hard, and it was also hard for the couple, but they still made time for one another, and after about one year of being married, the adorable couple was already thinking of expanding their family.

After trying for a little while, the lovebirds welcomed their first child, a daughter Ava Veronica Priestley and two years, and seven days later, the couple welcomed their second child, son Dashiell Orson Priestley. The family together is seen vacationing from time to time, and they also seem to be content with the life they’ve built together in their humble abode in California.